As we reported previously, popular rock band BUMP OF CHICKEN will be releasing a new Live DVD / Blu-ray focusing on the Tokyo Dome show that served as the closer for their WILLPOLIS 2014 Tour on February 4th.  Now the band has chosen to publish the footage of their song “ray” from the concert to their Official Youtube channel.

This was a particularly special performance since, unlike the rest of their tour, they played the version of “ray” which features Vocoloid singer Hatsune Miku in a duet with BUMP’s singer Fujiwara Motoo.  The Miku model used during the performance was produced via the use of the Diamond 3D Holographic System, which was developed by Toshi Atsunori of Creative Production A4A.

You’ll find both the music video and the track list for BUMP OF CHICKEN’s new Live DVD / Blu-ray right below the cut, so please feel free to take a peek. 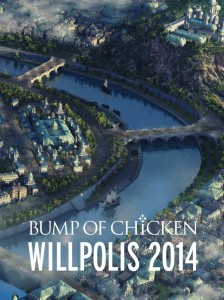