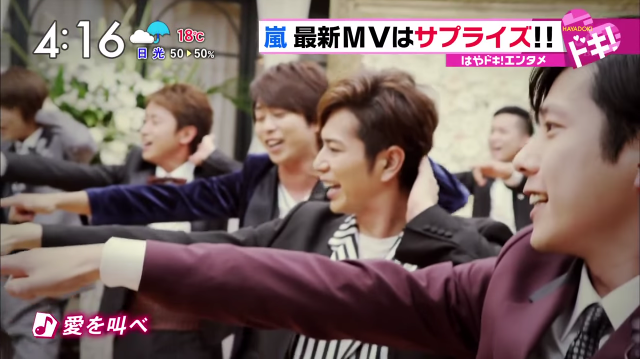 Previews for the music video of Arashi’s newest single Ai Wo Sakebe (Shout for Love) are out! The tracklist and covers were previously released.

As the CM song for Zexy, the song talks about the awkward and slightly wistful feelings of a man at a wedding ceremony towards the bride, who he used to yearn for, while still wishing the newlyweds a bright future. As “a love song from us,” it’s bound to become a new wedding song standard, offering a message to a woman from a man’s point of view.

Part of the MV was shot in an actual wedding reception held in Tokyo. The groom together with his friends practiced in secret. Towards the end, Arashi members appeared as a surprise, dancing and singing along with the groom. The PV previews also include some dance rehearsal footage.

A radio rip of the song is also out. Check out the latest previews from Arashi below. Single will be out on September 2.