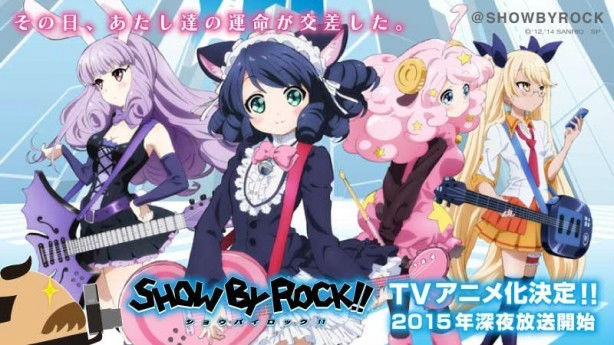 It has been revealed that Sanrio (the creator of famous characters like Hello Kitty, My Melody, and Little Twin Stars) has created some new characters! They will be a group a four girls featured in a new anime series called “SHOW BY ROCK!!”, and is in collaboration with FuRyu Corporation as well. “SHOW BY ROCK!!” will be airing on television in 2015.

The main points to look out for this upcoming anime series are its unique music, dramatic characters, and original story. Here’s a sample of the anime’s plot:

The characters live in the musical town of MIDICITY. Cyan, a cat girl who loves gothic lolita, is scouted by Maple Arisugawa, the president of a music production company. Cyan then becomes the vocals of a girls-only band called Plasmagica. The other members in the band are Chuchu (the honor student bunny), Retoree (the internet geek dog), and Moa (the space sheep). Together they all are aiming to be the number one band in the world.

In this anime, sinister-looking yet charming artists will appear as well.

Sanrio is well-known for having fans from children to adults for their characters. However, “SHOW BY ROCK!!” will be highly popular with teenaged girls that are into the latest trends. The company is expecting a huge increase in the fanbase with this new series.

Before the anime begins, its official website plans to release band visuals that will appear in the show on a monthly basis.

Once again, “SHOW BY ROCK!!” will begin its broadcast in 2015 airing on late nights. For more information, check out the show’s official website.