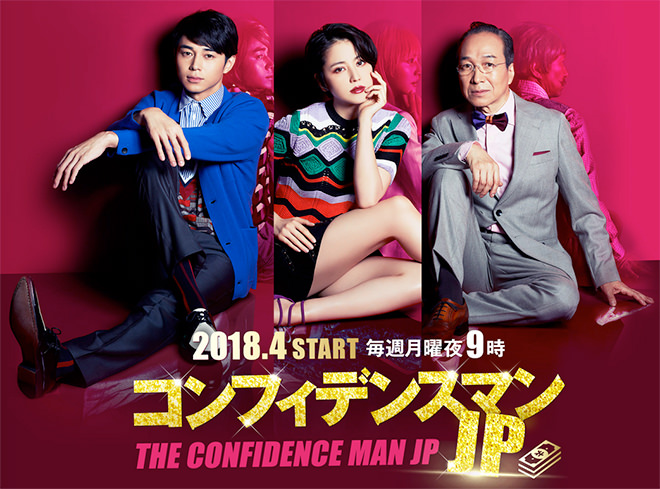 Nagasawa Masami is back to Fuji TV’s getsu9 after 11 years since “Proposal Daisakusen”. Nagasawa will be playing the role of a confidence trickster in the new drama “The Confidence Man JP” which will start airing in April! Screenplay will be handled by Kosawa Ryota (Date, Legal High).

She will be joined by Higashide Masahiro and Kohinata Fumiyo. The trio will play a team of con artists who work together to steal money from shady wealthy people like yakuza bosses and evil businessmen.

Dako (Nagasawa Masami) is a confidence trickster who has a weakness for money, fashion and delicious food. With her intelligence and extraordinary powers of concentration, she can master even profound specialised knowledge in a short time and become a “professional”. Together with the timid Boku-chan (Higashide Masahiro) and seasoned veteran Richard (Kohinata Fumiyo), she works as a team to extort money from the money-mad including CEOs of unscrupulous companies and mafia bosses by using whatever means possible. Once they set their sights on someone, the target never gets away. At times, they even trick their allies with excellent teamwork and crazy tactics.

(via Oricon, synopsis via Jdramas)