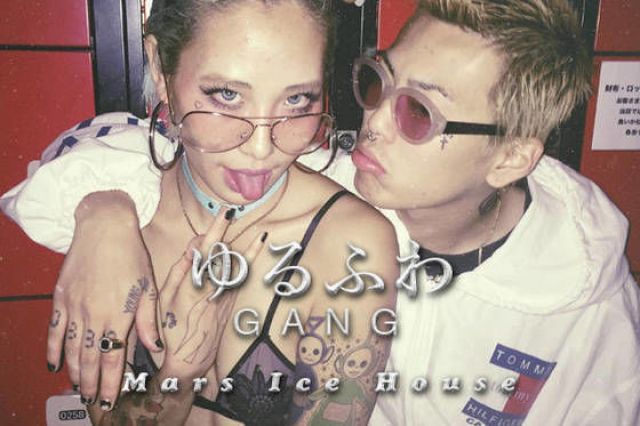 The co-ed duo consists of Sophiee and Ryugo Ishida, and made a splash in the Japanese indie scene with their critically acclaimed debut album “Mars Ice House” released earlier this year on April 5th. The duo cites video games as their primary source of inspiration, also having big dreams of advancing into the overseas market. Their cool and flashy style has already caught the attention of the mainstream fashion world. Yurufuwa Gang collaborated with Nike to help promote the sleek “Nike Sock Racer” shoe.

“Hunny Hunt” is an “immersive video”, otherwise known as a 360-degree video. This allows the viewer to control the viewing direction like a panorama, it’s recommended that an MV of this nature is viewed on mobile as it gives a much more interactive experience since when you move the phone the viewing direction moves also. The video takes place in a city where Sophiee and Ryugo have been recreated using 3D models. The two are surrounded by various changing objects such as giant cats, deer, flying dolphins, scuba divers, giant goldfish… you know the usual.

The retro graphics give it that cool aesthetic, basically making the MV look like it was created on IMVU during an acid trip. Kyary is shook. “Hunny Hunt” is a song included on “Mars Ice House”, which can be found worldwide on iTunes and Apple Music.

Watch the MV below the jump!