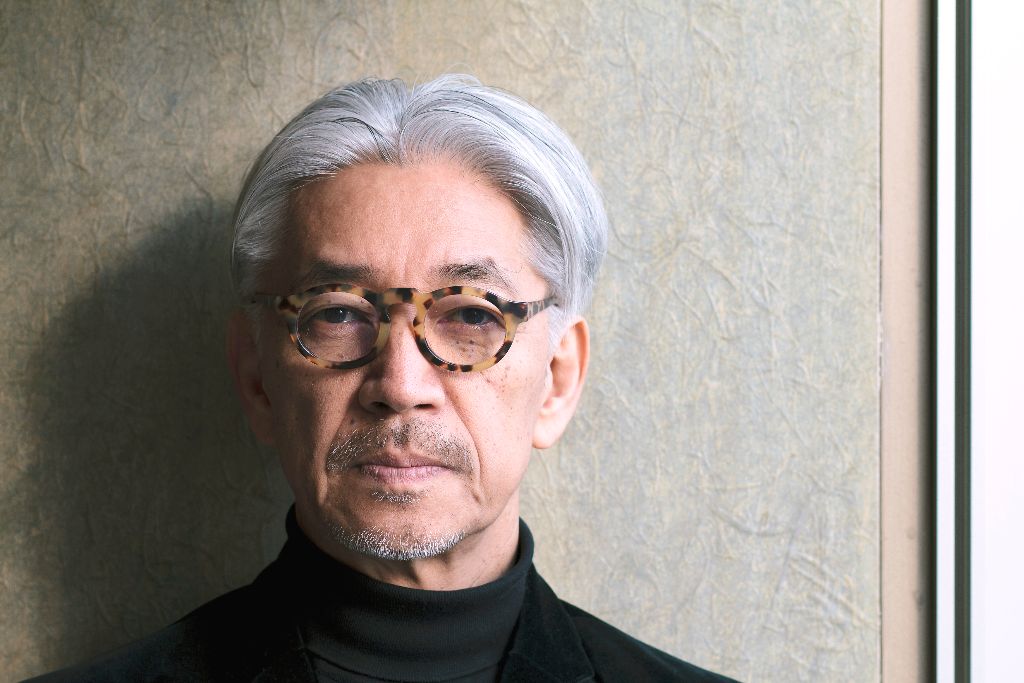 Ryuichi Sakamoto recently sat down with The Japan Times and discussed an array of topics, including his outlook post-cancer, techonological changes in the music industry, Cool Japan, the Tokyo Olympics, and Japan’s current state of mind.

Sakamoto recently returned to Japan perform at the Tokyo Opera City with the Tohoku Youth Orchestra. The orchestra is a 105-piece ensemble of young musicians from Iwate, Miyagi and Fukushima prefectures, which he musically directs. This concert was his first since surviving throat cancer in 2014.

“It’s the closest I’ve come to death during my lifetime,” he tells the newspaper, speaking the day after the Tohoku Youth Orchestra concert. “I feel differently since I came back from that place, compared to before. I want to capture the mood I have now, post-cancer, in my music.”

Since then, he’s created the soundtrack for Yoji Yamada’s “Nagasaki: Memories of My Son” and, in collaboration with Carsten Nicolai (aka Alva Noto), the Golden Globe-nominated soundtrack for Alejandro G. Inarritu’s “The Revenant.”

There may be a new solo album in the works as well. “I have a lot of sketches and ideas, but when you don’t use them they get stale,” he says. “You’re changing every day, right? Your curiosities and ambitions change, your ear changes, the music you like changes — and the music you want to make, too … I’m planning to begin work on an album when I get back to New York, but I think I’m probably going to start from scratch.”

Sakamoto has used his music career to further over ventures close to his heart. He began to use environmentally friendly packaging for his albums in the early 90s, and was powering his tours on renewable energy long before Radiohead took up the idea. He was also an early adopter of  the Internet, staging his first live online broadcast of a concert in 1995. “Internet speeds were still really slow then,” he recalls with a laugh. “We’d call it a concert, but you were basically watching static images that changed once every 10 seconds. The audio was all choppy, too.”

While Japanese labels were enjoying record-breaking CD sales during the late ’90s, Sakamoto had already anticipated how online distribution would upend the music industry. He lobbied for changes in the way that copyright licensing body JASRAC (Japanese Society for Rights of Authors, Composers and Publishers) handled music rights online, and cautioned the retail behemoths that their boom times were about to end.

“I was telling the Tower Records people in 1996 or 1997: ‘(CD shops) are going to disappear, you need to think about it,’ ” he says. “I thought they’d be able to get in early and make something like what we have with the iTunes Store now, but they couldn’t seem to do it.”

After spending his career championing technological innovation, Sakamoto is a little rueful about where things have ended up. In a world of YouTube, Spotify and Apple Music, few young people would think to pay to listen to music. Life isn’t much easier for session musicians: Why hire a band for a TV or film soundtrack when you can use sophisticated software synthesizers instead?

“There are still young people hoping to become professional musicians, but it’s so tough now, they’d be better off giving up,” he says. “I’d tell them to get a different job and play music as a hobby.” “Everybody’s hurting now, whatever the genre,” he continues. “The only people making money are DJs.”

Sakamoto has a talent for statements like this. Famously outspoken, in recent years he’s lent his voice to campaigns on issues including the relocation of the U.S. Futenma air base in Okinawa, government restrictions on free speech, and the police crackdown on all-night dance clubs.

He’s most closely associated with environmental causes though, notably his advocacy of renewable energy and staunch opposition to nuclear power. Following the triple meltdown at the Fukushima No. 1 nuclear plant in March 2011, Sakamoto quickly emerged as an influential figurehead in the anti-nuclear movement. In 2012, he organized the No Nukes festival at Makuhari Messe in Chiba, inviting Kraftwerk and a roster of well-known Japanese artists.

As a veteran of Japan’s late-1960s student protest movement, which he joined when he was still a high-school student, he was comfortable amid the demonstrations that swept the country during 2011 and 2012.

“With the demos we held in the ’60s, everyone was wearing helmets and masks, holding poles and fighting with riot police — it was totally different,” he says. “I think the way we do it now is better. Anyone can take part.”

He has regrets about the political retrenchment that has occurred since the election of Shinzo Abe’s LDP administration in December 2012: “For a couple of years there, I hoped that genuine democracy might take root in Japan … I felt there were more people who were openly speaking their minds, without being influenced by others.”

Does he worry a lot about Japan’s future?

“I do, I do. One of the unfortunate things that’s happened in the three or so years since Abe came to power is that Japanese people are going on about how brilliant Japan is: ‘This is great! This place is amazing!’ There are too many TV programs and campaigns like that, and I’m getting a little sick of it. It’s fine if people from outside the country praise you like that, but to say it yourself — things like ‘Cool Japan’ — I don’t think that’s ‘cool.’ ”

Being one of the country’s most internationally renowned cultural icons, Sakamoto may seem like an obvious ambassador for the government’s campaign to promote Japanese soft power overseas. So it’s surprising when he says that he hasn’t even been approached by the officials behind Cool Japan.

Maybe it’s because the campaign originates within the halls of the Ministry of Economy, Trade and Industry — the main cheerleader for Japan’s nuclear power industry.

“I hate them, and I think the feeling’s mutual,” he says.

The organizers of the 2020 Tokyo Olympics can also strike Sakamoto’s name from their invitation list. Although he composed and conducted the music for the opening ceremony at the Barcelona Games in 1992, he says that he wouldn’t be interested in taking part when the event returns to Japan.

Asked why, he reels off a list of the problems that continue to afflict the Tohoku region: the tens of thousands of people still living in temporary housing, the nuclear disaster evacuees unable to return home, the ongoing problems with cleanup efforts at the Fukushima No. 1 nuclear plant.

“It’s not ‘under control’ at all, is it?” he says, echoing the words used by Abe in his speech to the International Olympic Committee in 2013. “They should be making that their first priority.”

For Sakamoto, the way to end Japan’s current malaise is through encouraging fresh thinking — though he concedes that this is difficult in “a society where it’s hard to say things that others don’t agree with.”

“You won’t get original thinking in an environment like that. The ideas won’t come, and the talented people will just end up going overseas,” he says as we wrap things up.

“I’ve been saying this for a long time,” he concludes, “but if you take Sony, which is a company that really represents Japan, and compare it to Akira Kurosawa — just one person — Kurosawa is probably worth more worldwide. A lot of people don’t seem to get that.”

The full interview can be read here.