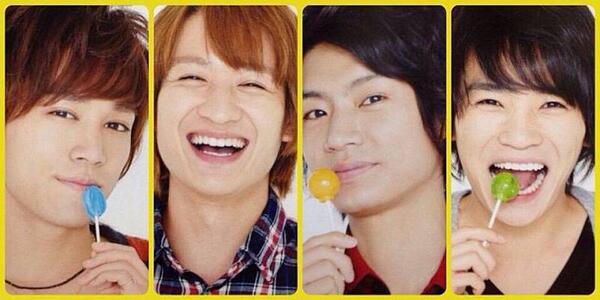 Busaiku, the subgroup formed by the four back members of Kis-My-Ft2 have released a new single, “てぃーてぃーてぃーてれって てれてぃてぃてぃ ～だれのケツ” or “Ti Ti Ti Terette Teretititi~ Dare no Ketsu” following the success of their first single, “Tana Kara Botamochi.” They recently performed the song on SMAP”s special “27 Jikan Terebi.” Check out the bizarre song and performance below:

The song possess the same camp value as their previous effort, with members doing eccentric choreography with fart jokes and butt references sprinkled in between. The group brings a whole new flavor to songs about butts. At the end of the song, the inevitable shout out to their group mates was made, with the same “Tama, Kita, Gaya” play on words that was used in their previous single. Despite having come out of the shadow of their three group mates, they were still kind enough to mention them in their own song yet again.

Perhaps if this single is equally as successful, we may even see an album by Busaiku.