Announced during the Music Station episode aired last Friday, Kanjani8 is the final cast attending the outdoor festival “METROPOLITAN ROCK FESTIVAL 2017”. METROCK is an outdoor event held in Osaka and Tokyo, and this year will take place on May 13, 14, 20, and 21. Kanjani8 is added as a surprise guest performing at the WINDMILL stage at Wakasu Koen Park, Tokyo on May 21. As per the announcement, tickets are already sold out for this show. This is the first time the group is attending an outdoor festival.

The group might have skipped last year in releasing their album but it looks like it might be worth the wait. On June 28, the group will be releasing their newest album “Jam” . The new album will include five singles released as well as new songs with contributions by top artists and producers that they have connections with through TV Asahi’s regular program “Kanjam Kanzen NenSHOW!” Packed with everything Kanjani8 and their ripening over one year and seven months, “Jam” has been put together. Full of pop, rock, and a variety of music, it is a new album that has something to offer to fans of all music genres. 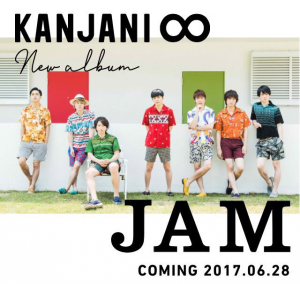 ・First-run limited edition A tracks
“(Title to be determined)”: members’ unit song (A)

CD
・5 singles
・6 songs contributed by other artists
・First-run limited edition B tracks
“(Title to be determined)”: members’ unit song (B)