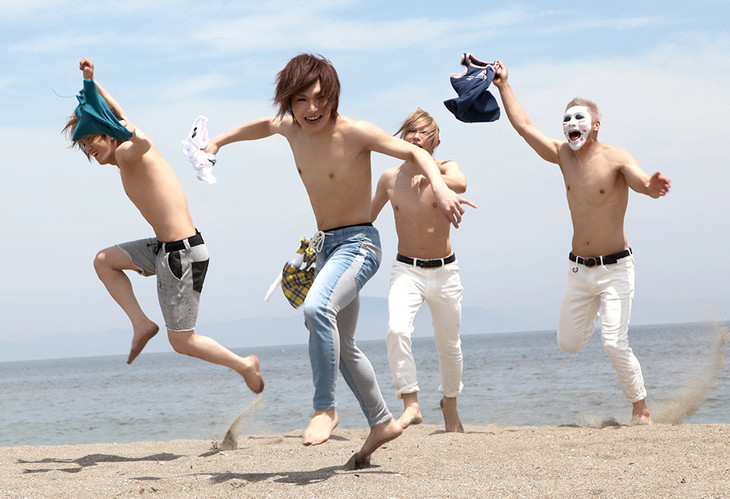 This is the second time the group will be collaborating with Morinaga’s ICE BOX drink. Back in April 2012, lead singer Sho Kiryuin shared on his official blog that the band would be releasing a new song called “ICE BOX” which would be used for the drinks summer CM campaign. The silly CM was a hit for the group and ended up becoming one of the more memorable CMs aired that year. Five years the later the boys are back for another campaign, trying to prove that “ICE BOX” is indeed the ultimate summer drink.

Throughout the 30 second CM the members partake in typical summer beach activities such as volleyball, swimming, and sprinting across the beach. GOLDEN BOMBER’s drummer Kenji Darvish encouraged fans to constantly watch the CM over and over again so the image is burned into their eyes, which when will then probably make you want to purchase an “ICE BOX”! Bass player Jun Utahiroba had a similar comment, saying that he hopes the CM tends #1 in Japan.

“ICE BOX” is a quite unique beverage. There’s no liquid, the “drink” consists of small flavored ice chunks. It has became a very popular treat due to Japan’s extremely hot and humid summers. Watch the full 30 second “ICE BOX” CM below, as well as GOLDEN BOMBER’s original version from 2012.