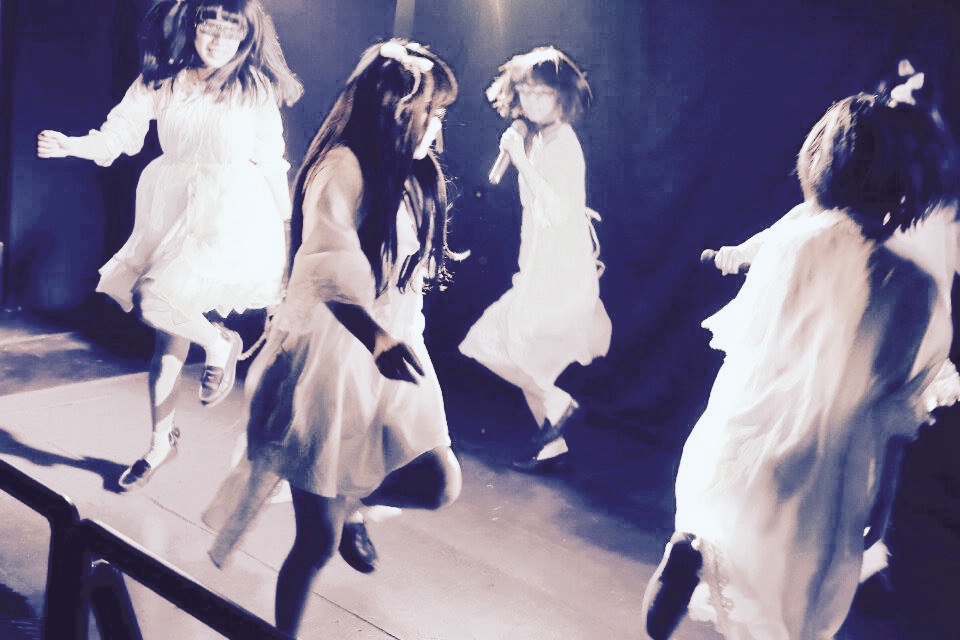 As you can notice from the headline of this article, even the name of this Idol unit is kind of bizarre. And it’s no coincidence that ·········, or simply Dots, represents one of the most interesting experiments in the Idol scene in a while, precisely since the niche took an unexpected turn in 2010. Composed by nine unidentified members wearing particular sunglasses to hide their identity, Dots’ main attraction resides in Shoegaze-influenced numbers as well as in a personality that’s enigmatic to say the least.

The unit’s compositions mostly rely on classic Shoegaze parameters, with occasional Brit pop and Post-rock bits here and there, and despite not being anything necessarily innovative, the unit promptly dodges the common label of “alternative music with cute vocals on top” with solid songwriting and a vocal performance that greatly fits the vibe of these numbers. Differently from many Idol acts out there, Dots’ music aims towards a clear direction and gravitates around it, creating a sound fairly enjoyable by pretty much anyone with an affinity towards this kind of sonority, a clear contrast to the dozens of units trying to catch different slices of audience by melding distant genres together. “Shuwa Shuwa EP” – the only release from the unit so far – captures this approach briefly but consistently, with the closing track “Nee” as one of unit’s most representative numbers. Furthermore, Dots recently performed several unreleased tracks in their live shows, so it’s highly probable that more material will get released in the near future.

Along with strong compositions, Dots‘ concept is what’s making waves in the underground Idol scene, and it’s mostly reflected in intriguing and bizarre live performances. Despite being composed by nine members, the girls rarely perform together, dividing themselves into sub-formations: sometimes they perform as a quintet, to then leave space to the remaining four girls in the second half of the show, in some sort of baton pass between members. The logic behind this modus operandi is pretty much unknown, yet it pales in terms of weirdness when compared to certain live performances: while most of the times, independently from the formation, they just perform like regular Idols (with some remarkable choreographies too), a few particular tracks get a special treatment. The clearest example is “Noise Suite“, black sheep of the unit’s catalogue that takes the form a four-minutes Noise number, that sees the members doing unpredictable things on stage, like brushing their teeth, screaming on the microphone for the whole duration of the track, or just standing still with lights off. The meaning behind all this, or the message that’s trying to be conveyed, is nothing but a big question mark: there’s a subtle artsy aura to it, but it’s unclear wether it’s voluntary, casual, or purposely fake.

When taking into consideration both the music and concept of Dots, it’s pretty clear that the mastermind behind this project is not just a random guy. First off, the Shoegaze-imbued tracks follow a formula that’s typical of some of the greatest bands of the genre, which, considering how more and more indie producers are taking the Idol route to express their artistry, it sounds like no coincidence; secondly, there may be a controversial meaning behind all the weird performances described above, something that whoever is behind this project is trying to convey, subtly hidden behind certain details.

For example, on the unit’s official website, nine dots constantly float around the home page, triggering words and phrases when clicked on, sometimes exposing quite personal details: each floating dot is the representation of a member, and it speaks the thoughts of the correlated girl when triggered, yet it is unknown which girl is referring to, amplifying the sense of mystery surrounding the project. Dots’ YouTube channel is yet another curios detail to consider, with daily uploads showing short segments of the members’ daily life without apparent reason, featuring each member constantly wearing these weird sunglasses that hide their identities. A live video on the same channel also portrayed another interesting moment: right before a show, the girls’ outfits were hung on the back wall of the stage, with several images projected onto them: after a while, five members got on the stage, put on the outfit, and started performing.

While there’s no clear meaning to all this, the concept surely opens up to different interpretations. Both sound and appearance share the same importance in the Idol world, and in a way, the Dots project is portraying this peculiarity in an ironic – if not provocative – way: the girls are represented as unknown dots (both in the name of the unit itself and on the website) and the choice of depersonalizing them may hide a message that indirectly prompts the fans to care first and foremost about the music and performance, also a potential sideswipe at the Idol concept that dominated the industry for over a decade in the past. As for live shows, the “Noise Suite” performance could be seen as a message towards hardcore fans and the acts they follow: the track is nothing but four minutes of chaos, and the apparently senseless performance may be a reference to acts who aren’t doing anything of value from an artistic standpoint, but that are still blindly followed by fans, represented by the people who are actually attending the chaotic performance despite making no sense at all; similarly, the moment where the members are simply brushing their teeth may be a reference to the obsession certain fans have towards every little detail of an Idol’s daily life. Additionally, the live show where the members dress up directly on stage before performing may be a metaphor to the “mask” Idols wear when making public appearances.

All in all, everything Dots does is surely enigmatic and cryptic, but also interesting and open to different interpretations. Behind solid compositions and charismatic live performances, Dots‘ concept somehow seems to be a symbolic representation of certain aspects not only of the Idol niche, but of the music industry in general, a world that sometimes puts the egocentrism of certain individuals and nonsensical details above music. And at this point, after 1,120 characters, this piece as well is a proof that, sometimes, fans too put their focus into little details when they could just simply enjoy the music. But isn’t anything that’s not related to music what differentiates Idols from “regular artists”?

These girls are a real mystery.