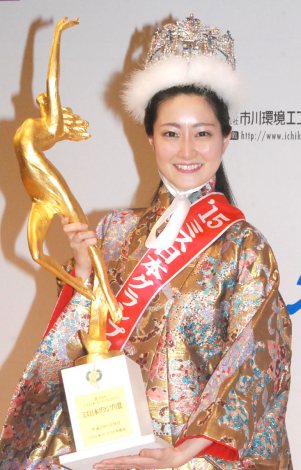 On the 26th, Chisato Haga (22) was chosen as the grand prize winner for the 47th “Miss Nippon Contest”. Haga is a Tokyo native and former synchronized swimmer. She is a student from Japan Women’s College of Physical Education.

Haga participated in many synchronized swimming competitions overseas representing Japan. Unfortunately, due to an injury from a competition in Japan last year, she was forced to retire. Haga’s mother encouraged her to participate in the Miss Nippon Contest.

When she received her award, she cried, “The past year was painful for me. However, I was able to muster up some courage to apply for Miss Nippon, and was chosen as one of the candidates. I am very happy to receive such a wonderful award.”

Haga’s parents were present at the competition rooting for her. She continued, “First, I would like to thanks my parents.” As for her future plans, Haga wishes to become “a woman who brings people happiness with her smile and to continue to be thankful for the people who supported her during the contest, even when times are rough.”

The first ever Miss Nippon Contest was held in 1950. This year’s theme was “Acting Japanese Beauties”. With hopes to find a female leader for our next generation, women who act positively on reaching their future dreams and goals were chosen for the contest. Out of 2,426 applicants, 14 finalists were chosen. The final rounds of judging included a dress and swimsuit showcase, doing a catwalk, and a talent performance.

The other awards included the following:

Congratulations to all of the award recipients!