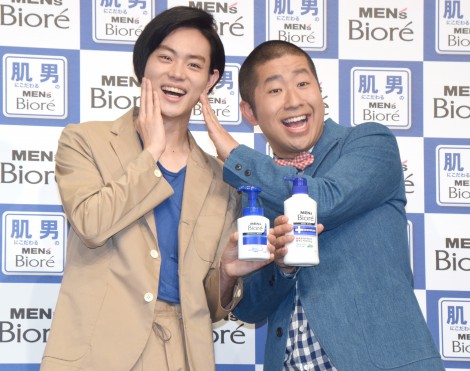 On March 14, Masaki Suda attended Kao’s “Men’s Biore New ‘Hadao’ Inauguration & CM Presentation” event in Tokyo.  This was his first public appearance after a magazine reported that he was in a relationship with actress Fumi Nikaido. However, when questioned by the press, he denied the report and stated that they are colleagues.

According to the report, early last month Suda met up with friends/couple Taiga and Mugi Kadowaki at a cafe in Omotesando.  Nikaido was reported to be seen at the same location later, which suggested that the 4 actors were enjoying a double date.

When asked about the report, Suda clearly stated, “It was Taiga’s birthday, so we all got together to celebrate.”  Regarding the double date, he responded, “That’s totally not the case.  There’s no relationship, and we’re just friends.  Rather, I wish I could go on a double date.” He added, “I was surprised.  On top of being happy that I’ve gotten to a point where tabloids take photos of me, I also need to be more aware and work even harder.”

Haraichi’s Yu Sawabe also attended the event.  Their new commercial together will begin airing from the 15th.