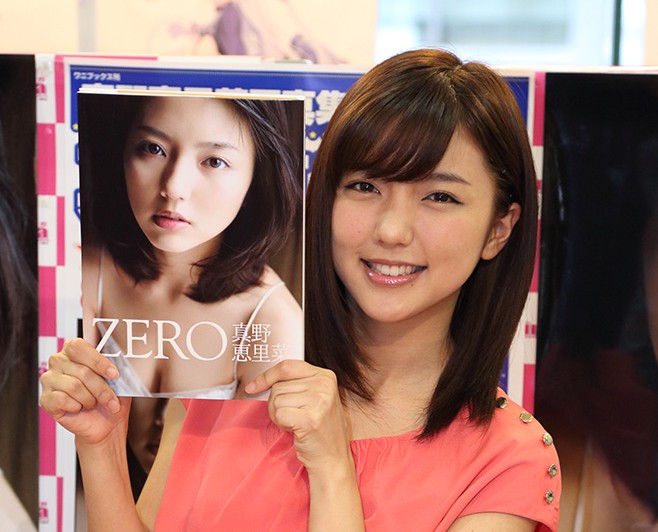 A couple of days ago we reported some “sizzling” previews of Mano Erina‘s new photobook. Today, a launch event for that photobook ‘ZERO‘ from the former Hello!Project soloist was held today at a Bunkyodo Bookstore in Shibuya.

This is the now full-time actress’ 7th photo book and was shot by two photographers, each with a different concept showing off a different side of Mano. The photographs follow a story of a country girl moving to the city and becoming independent.

“The photographs are more mature than my previous work,” she commented. “Since I’m already 23 years old, I’d like to try more adult things.”

During the event, she recalled her recent visit to London she embarked on alone, where she strolled the streets and enjoyed her time watching musicals.

“Just before shooting when I visited London alone, there was a situation where I was treated as if I were a child,” she mentioned about the time while she was eating breakfast, a man came up to her. “‘You should eat yogurt. It’s good for you,’ the mustached man told me. I guess I don’t look 23 years old.”

Her photobook ‘ZERO’ was released on the 27th. Mano is also currently enjoying a successful acting career starring in the live action adaptation of Mobile Police Patlabor. A feature film is scheduled to be released in 2015.

(Via TokyoSports, Tip from Sally)