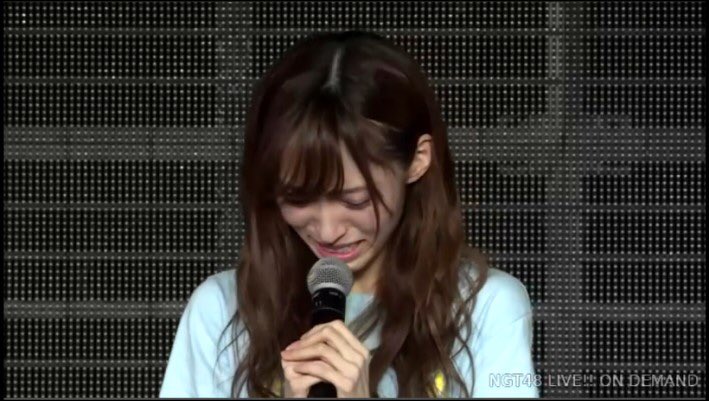 The announcement was made during the team’s final performance at NGT48 Theater on April 21. Announced last week, NGT48 management revealed that the group would be restructured and the the current team system would be dissolved.

On January 8th, Maho revealed during a SHOWROOM livestream and on Twitter that she had been attacked by two men in her apartment building the month prior in an effort to explain why she had been absent from handshakes and social media.

Making things worse, there were allegations that some of her group mates may have leaked personal information about Maho, allowing her to be targeted by the men. The assault made headlines worldwide, and the way AKS management handled the situation has been highly criticized by Japanese media.

The group itself has also suffered, with the city of Nigata officially cutting ties with them.

“When I’ve talked about the incident, the president told me, ‘It’s not an incident because no one was charged with a crime,’ and I was told not to attack the company,” said Maho in her graduation speech on April 21. “I wanted NGT48 to be a place for wholesome idol activities but no matter what I did, it didn’t matter, and has become a place where I can longer continue being an idol.“

Following today’s theater performance, NHK displayed a drop-down text on TV with this graduation news, an alert usually reserved for natural disasters such as earthquakes.

Following today’s theater performance, NHK displayed a drop-down text on TV with this graduation news, an alert usually reserved for natural disasters such as earthquakes.

Maho Yamaguchi, Rena Hasegawa and Riko Sugahara will take part in their final handshake events on May 5th and 6th, and ultimately graduate from NGT48 with a theater performance on May 18.