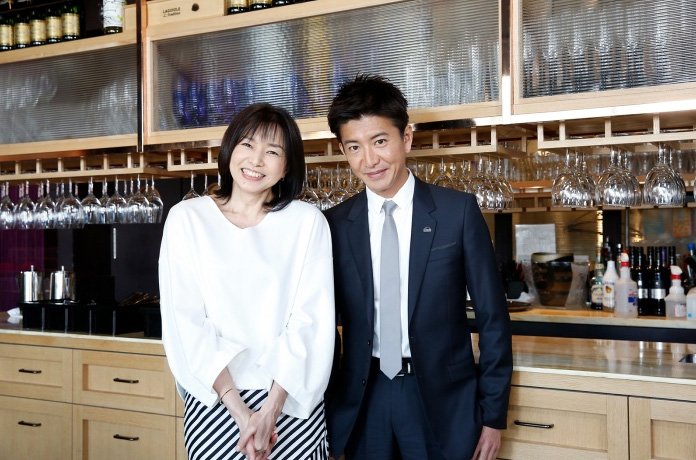 Fans of the classic Jdrama Long Vacation will have something to celebrate as it was announced that actress Yamaguchi Tomoko will co-star with Kimura Takuya. This is after 22 long years since their popular drama in 1996, which recorded an average rating of  29.6%. Yamaguchi will appear in TV Asahi’s currently airing drama “BG: Personal Bodyguard” for episodes 6 and 7 and will play the role of the former wife of Kimura’s character.

And since Johnys lifted the ban on not just online press conference photos, but also profile photos and Jweb photos, we get to enjoy a lovely two-shot of Kimura and Yamaguchi. When they were reunited during costume fiiting, Kimura opened his arms to give her a hug and lifted her like their characters in “Long Vacation”. Yamaguchi said, “It was a magical feeling and the memories to that time rolled back in an instant. I can’t believe it has been 22 years, it feels like only 22 seconds have past”.

When Yamaguchi visited TV Asahi for costume fitting, Kimura said “I was in the waiting room next to the studio and I could see her appearance from the other side of the glass. I was frozen when I saw her. I felt happy with the reunion but 0.5 seconds later I noticed everyone from the drama staff were looking from the studio and the hallways, I came back to reality at once (laughs).”