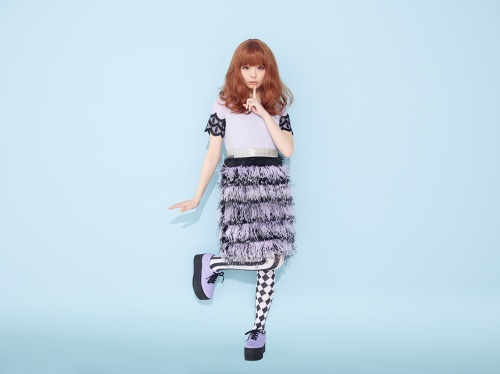 The holder of Japan’s current #1 album, Kyary Pamyu Pamyu, has been featured on the website of American Vogue. Check out their article on her and a stream of her first English song after the jump!

Kyary Pamyu Pamyu (née Caroline Charonplop Kyarypamyupamyu) is one of the world’s biggest game-changing pop phenomena, but if you live in the States, you might not have ever even heard of her. Though she’s a one-woman cottage industry in her native Japan, releasing three number-one albums, garnering huge social media followings, and endorsing major products, it’s been extremely difficult for Asian artists like her to cross over and climb the American charts, Psy’s “Gangnam Style” smash aside.

If anyone can do it, though, it might be this Lady Gaga of Japan. Kyary has an off-kilter pop appeal that feels perfectly suited for a Katy Perry radio world, and she’s distinguished herself with hyper-creative videos like “PONPONPON” (over 67 million views!), which shows her dressing up in an escalating series of insane outfits that are Internet-age perfection. Her new album, Pika Pika Fantajin, out in the U.S. on July 29, is being produced by longtime collaborator and J-pop mastermind Yasutaka Nakata, and features her first-ever all-English song, “Ring a Bell,” now streaming exclusively on Vogue.com. Take a listen here. If the stars align, you might just be hearing this voice all over American radio in a matter of weeks.

Ok, couple of issues here. First of all, Vogue couldn’t figure out her real name? It literally is the first thing that comes up when you Google her…

And that song… What was Nakata thinking? And what is Vogue thinking? Do they really think the American public is down for this sound? And is this shade towards Katy Perry and her fans?

And why this push now? Could it be because of her dwindling sales in Japan? In its opening week, her new album sold about 1/3 of what her 2013 album did in its opening week. And the singles this era really didn’t catch on digitally (she’s not the kind of act that does well physically singles-wise), even with massive promo pushes.