Just as another Johnny’s talent Yamashita Tomohisa mispronounced “Wi-fi” as “wee-fee,” Kimura Takuya made an embarassing mistake with his English. He made the grave error of mispelling the King of Pop Michael Jackson‘s name on national television. What adds even more salt to the wound is that KimuTaku even once had the honor of meeting the legend.

On the episode of Fuji TV’s SMAPxSMAP that aired on the 27th, Kimura Takuya mispelled Michael Jackson‘s name in English.

On that day, the guests of Bistro Smap were the four members of SEKAI NO OWARI. In the corner titled “SMAP VS SEKAI NO OWARI Which One Has the Best Teamwork?” the hosts SMAP faced off in a quiz contest against SEKAI NO OWARI.

In this quiz, when one member flips a card over containing an answer and the rest of the member’s answers match, the team gets one point. The question that proved SMAP‘s superiority was “Which group have you met that caused the most tension?” Everyone in SEKAI NO OWARI answered SMAP except Fukase, who put “Yuzu.”

Katori garnered some laughs by copying Fukase and writing “Yuzu,” but all four of the members soon flipped their cards, which all said “Michael Jackson.”

However, on Kimura’s card “Michel Jakson,” was written, which proved to be a regretful mistake.

No one touched upon the miss. Nakai continued the program by saying “Before and after that there were no other [Japanese] variety programs that Michael appeared on except SMAPxSMAP“. 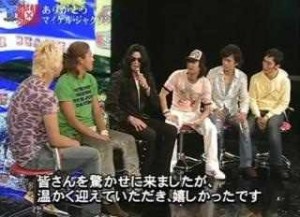 KimuTaku also once made another mistake in the past, spelling “love scenes” as “love seans.” Maybe he needs to brush up ons his English a tiny bit. 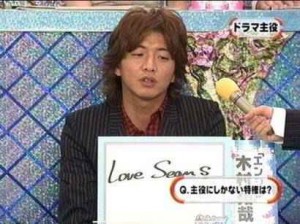