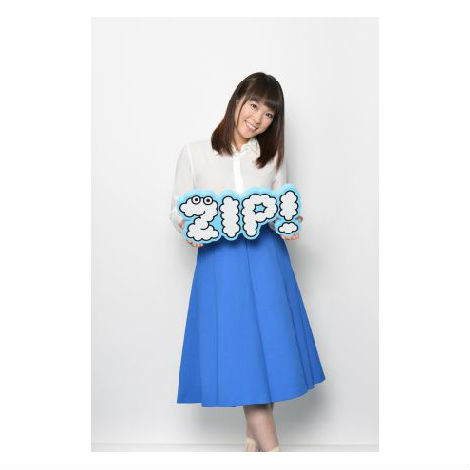 Actress Kii Kitano (23) will serve as a new host for NTV’s news program “ZIP!” (Mondays through Fridays from 5:50 am). Mari Sekine (29), who has been a host since the show first broadcast in April 2011 and announced her marriage to Korean singer K the other day, will pass on her hosting role to Kitano during her graduation on September 29th.

When Kitano received her very first hosting role for the show, she said, with spirit, “I did feel nervous, but I had no strange ‘fighting spirit’. I hope to brace myself as if I was suddenly offered a new role for a play.” She added, with motivation, “I thought there was a possible change of color and flow with the show up until now, so in order to not lose the current charm of ‘ZIP!’, I think it would be nice if we could change in a good direction.”

Kitano also talked about Taichi Masu (32), a fellow announcer who will be working with her: “I had the impression he is a serious and straightforward person. I think there will be many things I won’t understand, so I will rely on Masu-san for help.”

In comparison, Masu made a comment to welcome his new “partner”: “It feels like Mari-san’s ‘little sister’ is coming, so I hope I can be a reliable ‘older brother’ and do my best with her.”

Aya Imaida, the producer of the show, thought Kitano was “perfect because her smile will bring energy to those watching the show in the morning.” Imaida also hopes her “natural cheerfulness makes everyone throughout Japan happy.”

Kitano wants to be the support for the female teens and twenties demographic. “For example, when there are OLs that feel like that they don’t want to go work in the morning, I’ll report morning news and mood of the show with energy and happiness to them. I’d be glad if I can make them feel like they will do their best that day.”