KAT-TUN’s Kazuya Kamenashi will be starring in his first romantic movie “P to JK” (Police & Joshi Kousei). The live action adaptation will be released in spring next year. Co- starring with him is actress Tao Tsuchiya. This is also the first time for both actors to work together. The movie is based on Maki Miyoshi’s manga series which started in 2013 and serialised in monthly manga magazine “Bessatsu Friend” and has total sales of 2.1 million copies.

A female 16-year-old high-schooler Kako (pretended to be a 22-year-old college student) went to a party for adults (goukon). While there, she meets Kota who at first has a very intimidating aura. But once he saves her from an awkward situation, she wants to know more about him as does he. That is until he finds out she isn’t 22 and changed his attitude drastically and starts rejecting any possible romance between them… Kako runs into him again, but this time he’s working as a police officer. Kako still wants to get closer to Kota, but he isn’t interested… or is he? When Kako got injured to protect him (she took the bullet meant for him), Kota proposed. Kako’s father strongly objected but relented with one condition, they kept it a secret until Kako graduates. So, their ‘marriage life’ starts… 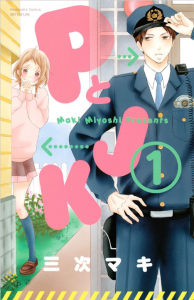 Shooting begins next month and will be directed by Ryuichi Hiroki (Strobe Edge, April Bride, Wolf Girl and Black Prince). The manga author, Miyoshi Maki is happy with the adaptation and reveals that her daughter is a huge fan of Kamenashi. Since she was 4 months old, she would stop crying once Kamenashi is on TV. So as a mother too, she is happy with the casting.

The producer says the serious and awkward part of the role is very refreshing, and believes Kamenashi can play that attractively. For Tsuchiya, she’ll be able to express the charm of the pure and single-minded heroine Kako.