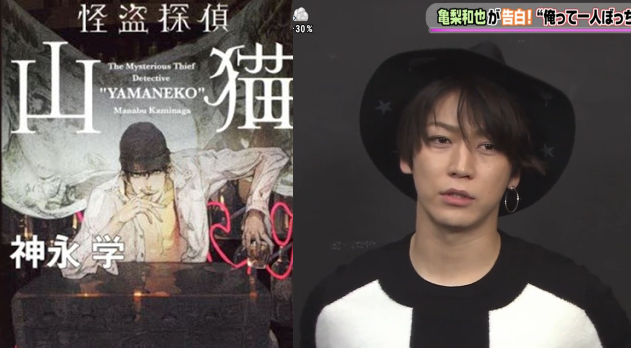 KAT-TUN’s Kamenashi Kazuya will be starring in the new NTV drama “Kaito Yamaneko” (The Mysterious Thief Yamaneko) based on the novel “Kaito Tantei Yamaneko Series” by Manabu Kaminaga. Kamenashi has played a wide range of roles such as a monster in “Yokai Ningen Bem” and a spy. This is his first time challenging the role of a thief. The drama will air on January 2016, Saturdays, 9 pm.

Kamenashi will play the role of Yamaneko who is a thief that steals money from the evil through brilliant tricks, while at the same time exposing their evil deeds. He focuses more on “How to steal…” rather than “Why steal…” which leaves the target of the theft almost not noticing the crime.

There will be elements of action in the drama and Kamenashi will challenge jumping from building to building. Kamenashi says that it is fun rather than scary, as he has experience flying many times in concerts and musicals.

The drama will be directed by Inomata Ryuichi (Kaisefu no Mita) and script written by Muto Shogo (Wakamonotachi 2014, Kazoku Game).