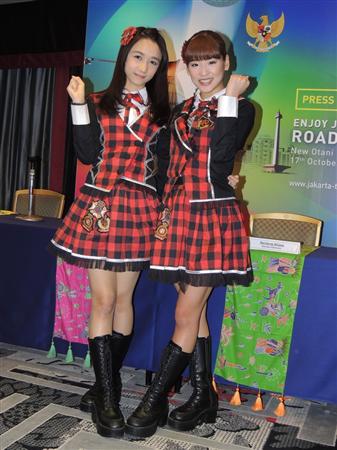 On October 17th, Haruka Nakagawa (22) and Ayana Shahab (17) of JKT48 visited Osaka on behalf of Jakarta Tourism to accept the role of “Enjoy Jakarta Ambassadors” for the group.

Nakagawa explained that on the previous day she visited Namba for the first time. Shahab had lived in Osaka as a child, so she was going to take Nakagawa around. Instead the two got lost and roamed the city aimlessly for 2 hours. Eventually they made it to Namba Grand Kagetsu (NGK) where they were able to take a commemorative photo.

The girls commented, “The NMB48 theater is on the other side of NGK. Next time it would be nice if we could collaborate with NMB and help spread the word about Jakarta.”