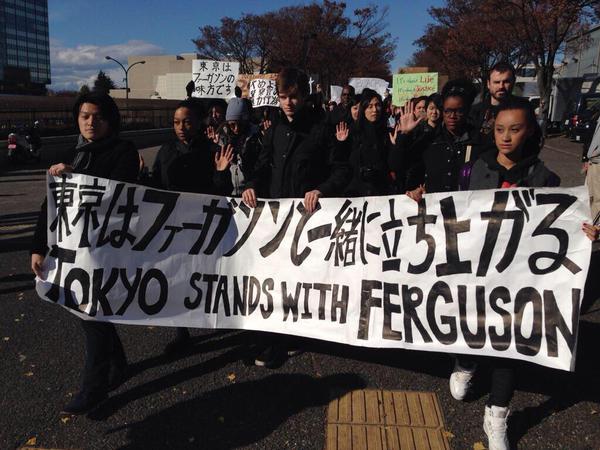 In recent weeks, after non-indictments rulings of two high-profile cases involving white police officers killing unarmed black Americans, many protests and demonstrations ensued around the world. These are the deaths of Mike Brown in Ferguson and Eric Garner in New York, by white police officers.

And on Saturday, 6th of December, many took the streets. The event was organised by the African-American Youth Travel Program (AAYT), situated in Japan. It  quickly gained traction among foreigners and natives alike in Japan.  Even J-urban singer, Aisha joined and aided in the demonstration, and can be seena at the forefront carrying the banner. She has always been vocal about the treatment of black Americans so it was not surprise that she would also back this event. Before the group started their march, Aisha sang the song, Amazing Grace.

The event started at 12pm and the group met at Yoyogi Park’s Keyaki Namiki. It was made with this goal as quoted on the event’s facebook page

A silent demonstration for Mike Brown, Ferguson and protest against police brutality. We will use peace to demonstrate the importance of equality no matter what race you are. Our Lives need to be protected.

Individuals in the march chanted phrases like “hands up, don’t shoot” and “Eric Garner, I can’t breathe”, in relations to the killings of Mike Brown and Eric Garner in America. The group travelled from their meeting point, making their way through Shibuya, even crossing Japan’s busiest street crossing, the Shibuya crossing.

Below, you can watch the video of the event that includes the march as well as interviews.  Along with pictures from social media sites.

The event gained media attention and was covered by NHK News

#Tokyo4Ferguson solidarity march. This is a global movement in case you didn’t know! Photos by @DarcNoodles pic.twitter.com/7QxOL7bd2T