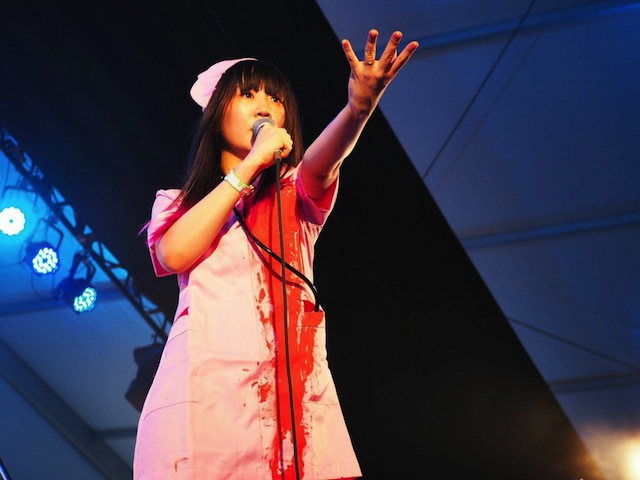 Recently, Vice’s music blog Noisey interviewed up and coming singer Seiko Oomori. This article exposes her to a larger audience of indie music listeners outside of Japan. In the interview she discusses her image, her sound, what bores her, and much more. Check out the full interview after the jump!

Your immediate reaction when you first hear a song by Oomori Seiko is likely to be: “What the fuck is this horrible mess?” But dig a little deeper and you’ll learn that her sometimes insane, sometimes beautiful clash of folk, punk and pop-idol tropes is a fun and furious force.

At the recent Rock In Japan festival, she performed acoustic, without her backing band, dressed in a too-short nurse outfit and laddered tights drenched in fake blood. She spiked her gentle fingerpicking with abrasive violent thrashes, which lingered in the air long after she’d returned to quiet.

In person, Oomori (pronounced “or-morry”) speaks a thousand miles per hour, giggling nervously and deliberately giving contrarian or confounding answers, determined not to let you figure her out. Which is cool, because who wants pop musicians that are too easy to read? Hear the lady out, check the YouTube clips and make up your own mind.

Noisey: Your entrance on stage today in the blood-soaked nurse outfit was hilarious, because in your official photo that they’ve used on the festival website you’re dressed up like a cute idol. I love the idea that the many idol fans at this festival who turned up expecting some nice gentle pop music will have been subjected to quite the opposite. I bet they were terrified. [FYI Japanese Idol Pop can be defined as a manufactured star promoted as having the perfect public image. Idols singers usually have a cute and non-threatening image to appeal to lonely older men as well as young girls.]
Oomori: Haha, yes. I don’t like people to think they can pin me down. I change my mind all the time. You know, you like something one minute and hate it the next, or you like a boy and then you can’t stand him. I don’t want people to form an impression of who I am, so I deliberately put out a lot of false information.

You don’t make idol music, but you do flirt with the imagery. What do you like about idol music?
I used to like it because it was something so different from what I do, but then I found that the fans found my appropriation of it fun, so it became fun for me, too. I like the energy of idol music. It’s like Disneyland. Everything’s so sparkly. It’s music that makes people happy, and although my way of doing things is completely different, I still want to make people a little bit happy.

It’s hard to tell whether you’re genuinely into idol music or if you’re mocking it, like in the teaser video for your next single, “Kyuru Kyuru,” where you do this awesome half-assed choreography.
Oh, I guess so. But I’m pretty sure people can work it out for themselves.

Your music mixes up folk and punk as well as that pop taste—how do you describe it?
Hmmm, I’ve never really thought about it. It’s just good melodies, interesting lyrics and a good voice. That’s it. As long as you have those you’re set.

John Lydon once told me that The Sex Pistols were not a punk band, they were a folk band. And when you think about it, yeah, punk is just another kind of folk music really. Do you feel that?
Well, you know, anything’s OK. Even if it’s not music. Whatever.

How do you mean?
So long as it’s fun, anything’s good.

So what kind of music do you make? How do you describe it?
Ummmm… Disneyland in hell, haha.

You’ve said you’re a big fan of J-pop artists like Morning Musume and Utada Hikaru. But from such mainstream influences going in, something pretty different comes out of you.
Really? Is it different I don’t think it is?

OK, then how is it similar? The production of that kind of music is completely different. Like Utada Hikaru sings over an electronic backing track, which is different than what you do.
Well, I sing over a track on my CDs. And sometimes I play with a band onstage too. I was going to do that today, actually, but the set-up time on the stage was too short, so they asked me to play solo.

How is your live show different when you play with a band?
It makes life easier. When I’m on my own I have to make all the sound myself. But they’re both as much fun as each other. Singing is always fun. 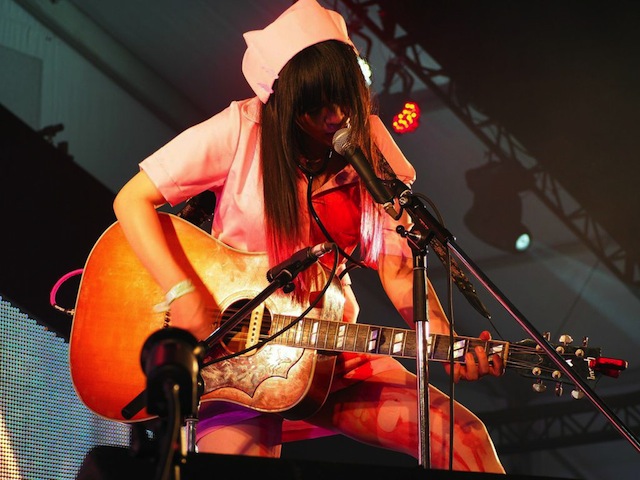 How important is style to what you do? You always have cool outfits in your videos, and that blood-soaked nurse uniform on stage today was awesome.
One thing I hate about most Japanese folk musicians is that they just stand there not moving and they’re so dark. I like things that are cute and I like movement, and I also like things that make you go, “What the hell is that?!” So that’s what I do.

What did the kanji on the back of your nurse outfit say?
“The end.” I want all sorts of things to end, haha.

What’s boring?
Pretty much everything is boring! If you have boring people who never notice when something is interesting, the interesting people can’t be interesting, because they get overlooked. I want to change that rule as quickly as possible.

You have a video on YouTube where you’re making a Hello Kitty cake. Did it taste good?
It was delicious! [Glares at management staff until he agrees.] I’m a good cook. It tasted like blood.

That’s something an idol might do, make a video of them baking a cake to put online and show how cute and domesticated they are. But somehow when you do it it’s more sinister.
Hey, everyone loves cute stuff, and all women have certain things they feel they’re expected to be good at. I want to make it OK for someone like me to do those things too. If you want to wear pink ribbons and Hello Kitty stuff, you should be allowed to do that, whoever you are.

I love your song “Mahou Ga Tsukaenai Nara Shinitai” (If I Can’t Use Magic I Want To Die). What magic can you wield?
I can’t. But if I could, I’d like to make another Oomori Seiko to do everything for me, so I could sleep all day, haha!

You have a song “Zettai Kanojo” in which you sing (in Japanese) that “Girls are totally the best”. What so great about girls?
Girls are cute. Boys are stinky. Girls definitely have more fun. They get to wear cute clothes, too.

In the “dislikes” section of the profile on your website, you’ve written, “All my ex-boyfriends.” What’s up with that? Did you have some bad experiences?
There wasn’t any big problem in particular. But I don’t like hearing people say things about me, and once your albums start to sell, your exes come out of the woodwork, you know? So I wanted to just shut them down before they start. I’m not interested in nostalgia for things that are over.

How long does it take you to reach that stage? Like, when will you stop listening to the single you’re about to release in September?
About half a year, every time.

Why?
Because it’s over. Making a CD feels like a burial, a time to say goodbye. It’s something I sang at that time, and now it’s different.

A lot of your lyrics are rather sexual.
What? No, no, you’re imagining it. It’s all in your head.

Well, I mean it sometimes sounds like you use sexuality as a weapon.
Hmmmm, maybe. But that’s all I do all day, you know?

What is?
You know, at home.

Probably most of the people reading this won’t have heard of you before. What’s your message to Noisey readers and the world?
Just write that I’m extremely noisy, haha. “She’s so noisy! Even though she played acoustic guitar all alone, she was so noisy.”

Well, that’s the truth, so that’s what I’ll write. Thanks! 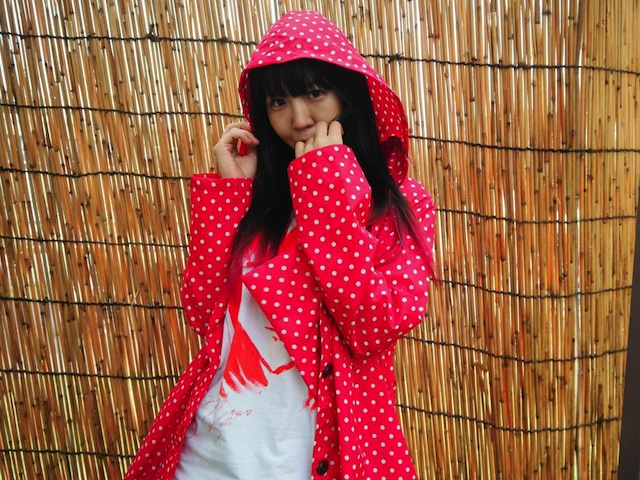