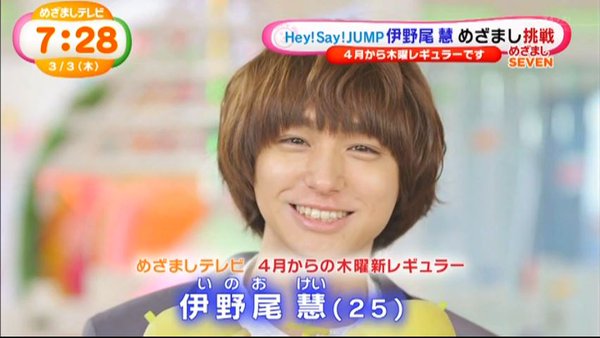 Starting April, Inoo Kei of Hey! Say! Jump will become a regular on the morning TV program, Mezamashi. This will be Inoo’s first time as a regular on a news show and another opportunity to utilize his degree in Architecture from Meji University.

Read more after the jump!

Inoo will be appearing every Thursday, doing special reports and conducting interviews. Inoo was praised by Chief Producer Kazuki Narita on the gap between his cute appearance and his mature view on society and specialized knowledge of architecture. He also commented on how Inoo’s mysterious character will bring a breath of fresh air to the program. Narita hopes Inoo’s addition will appeal to an younger audience.

Inoo expressed that he was surprised to hear the news as he had watched the program ever since he was in elementary school. He wants to bring out his individuality while maintaining professionalism as expected on a morning news show. Inoo stated he would like to do his best to be loved by many people. He also hinted that he would like to do something relating to the 2020 Olympics as various venues are being built and prepared.

Look forward to seeing Inoo starting April on Thurdays from 5:25 to 8:00!