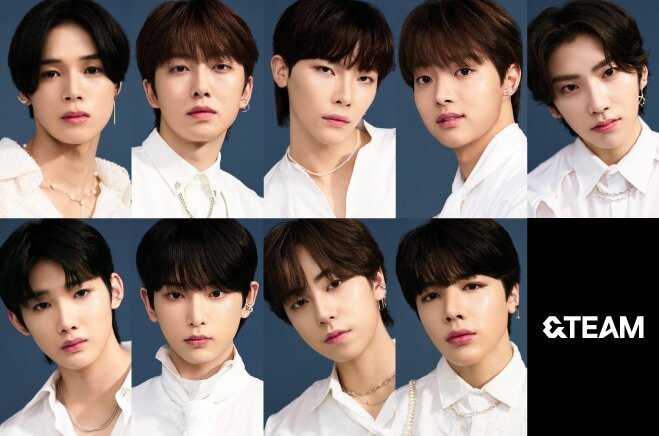 In July, HYBE LABELS JAPAN, the Japanese branch of HYBE, debuted their audition series “&AUDITION -The Howling-.” The goal of the show was to create a boyband in Japan that will debut on the world stage. Today, that boyband was revealed.

The new group is called &TEAM. It consists of the four trainees from 2020 Korean survival series “I-LAND” (K, NICHOLAS, EJ, and TAKI), along with five of the contestants from the new show (JO, HARUA, MAKI, YUMA, and FUMA). The group was revealed during the live finale of “&AUDITION -The Howling-.” Two songs, “Running with the pack” and “Melody” were also performed on the show. Both songs are now available digitally.

&TEAM will make their official debut on December 7, with more details to be announced. Their debut single will be released in 14 versions, with limited editions A & B, a regular edition, and a different version for each member.

The day after the release, they will hold a fan event at Tokyo Metropolitan Gymnasium for 10,000 fans who pre-ordered the CD on &TEAM Weverse Shop JAPAN or the UNIVERSAL MUSIC STORE.