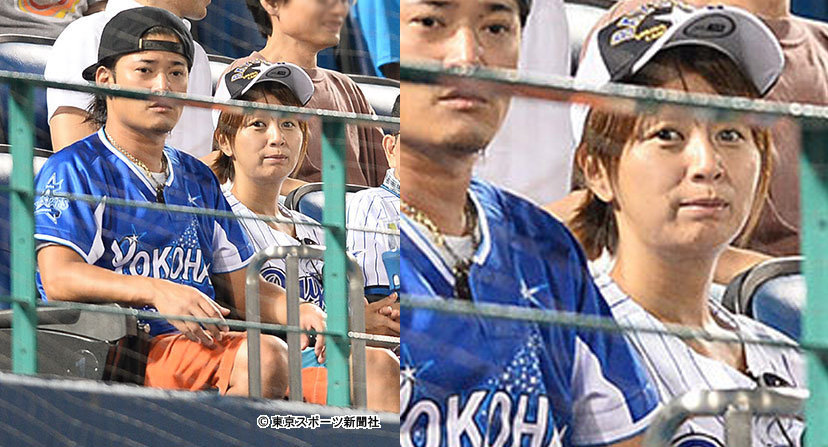 For some time, singer Ami Suzuki and actor Sousuke Takaoka, former husband of Aoi Miyazaki, have been seen on a pattern of baseball dates.

The two were spotted at the professional baseball game between Yokohama DeNA BayStars and Hiroshima at the Yokohama Stadium on the 6th. They sat together in the front row seats watching the game. Suzuki was wearing the DeNA BayStars uniform and cheering on the team.

However, pictures concerning these events from Tokyo Sports have brewed a public discussion of Ami Suzuki, stating that she looks like “a normal middle aged woman” and “she’s like a different person”.

Because of her lack of make-up in the photos that appeared in the newspaper taken at that moment, the woman who is considered to be Ami Suzuki does not seem to have her normal face, and the lines around her cheeks and mouth were clear. Also, because she looks a little plump, it looks as though she has aged considerably.

The impact of the photos were tremendous, and on the internet many people raised their voices of surprise:

「劣化なんてもんじゃねえ…」
“Isn’t this complete deterioration …”
「ノーメイクだとこんなもんなのか」
“So is she like this without make-up on?”
「写真のどこを探してもアミーゴがいないんだが」
“Wherever I search this picture for Amigo, she can’t be found.”
「ただのオバサンじゃねえか」
“Isn’t that just a normal middle aged woman?”
「偶然隣り合わせた他人じゃないの？」
“Isn’t that just a stranger who happened to be sitting next to him?”
「これが本当に鈴木亜美だったら腰抜かす」
“If that is the real Ami Suzuki then I am so surprised that I can’t stand up.”

On top of all that, an opinion of “is this ‘Amigo’s mother?” spurted out, as people who did not recognize her as Ami Suzuki appeared one after another.

Although at a glance it looks like a different person, her typical ‘duck face mouth’ and the shape of her nose was the same, so the viewpoint that it is the real Ami Suzuki is strong.
A person related to the entertainment business commented, “during her idol times it was said that ‘although she looks natural in actuality her make-up is thick’ so with light or no makeup her face could completely change.”

It also stated that because at one point Sousuke Takaoka repeatedly put radical statements online. Avex was against the relationship, but after he promised to stop the relationship continued.

(via Tokyo Sports, Translation by JenJen)