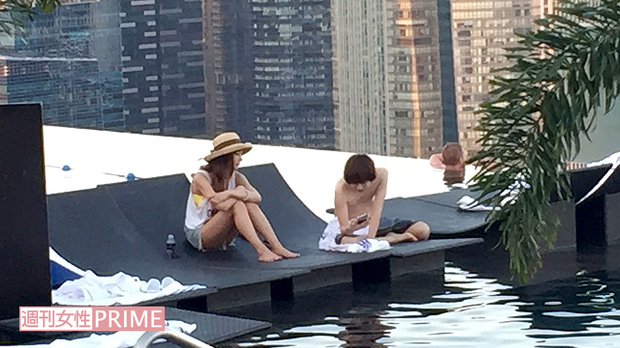 The latest issue of tabloid Shukan Josei, out today, has released photos of Hey! Say! JUMP’s Inoo Kei (26) and AV actress Asuka Kirara (27) together on a tryst abroad in Singapore.

The photos show both Inoo and Asuka poolside. The shirtless Inoo is showing her something on his phone, while Asuka doesn’t look too impressed or invested in it.

Guests at Marina Bay Sands, the hotel they were at, reported that they also saw the two snuggling up together in the Jacuzzi together.

Since the story broke, there has already been some damage control.

According to Johnny’s Jimusho, the two first met each other about a year ago at a friend’s dinner party. They then happened to have met in Singapore, by chance, and went to the pool together, but they are not dating or in any sort of relationship. Just friends, says Johnny’s Jimusho.

Asuka Kirara maintained silence when Shukan Josei reporter threw questions at her in rapid fire, about her trip to Singapore as well as Inoo Kei, and the same reporter was asked to leave when a staff member intervened. Her agency reportedly says she went to Singapore with a female friend (pictured below) and corroborated the story given by Johnny’s Jimusho.

According to social media receipts, of which she is wearing the same hat and talks about a “Goood trip“, the getaway happened around 38 weeks ago in January of this year. Why is it just surfacing now? Unknown.

Another photo (at the source), that has since been deleted from her Twitter, shows the AV actress wearing the same outfit. And days prior to that date, Inno was reportedly spotted at Haneda Airport International Terminal with Arioka Daiki, also of Hey! Say! JUMP.

Is it love? Or just coincidental meeting in a foreign country at the same hotel at the same time? Is it even Inoo Kei?