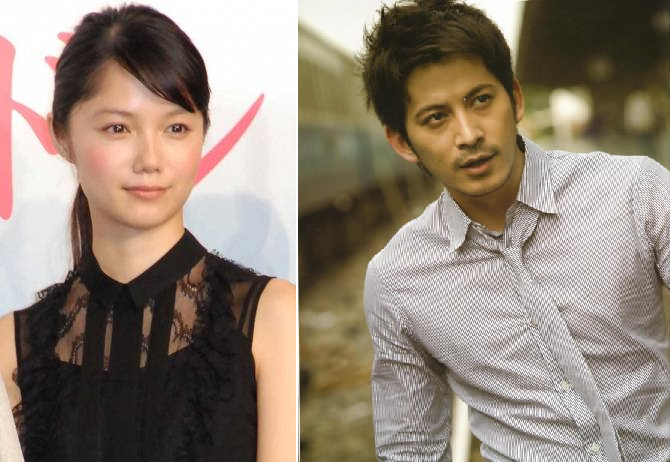 Josei Seven has reported that V6’s Okada Junichi and actress Miyazaki Aoi are dating. The magazine has published a photo of the two.

From the photos taken, the two were seen wearing a hat and mask, covering their face. Okada is holding a poodle in the left arm and a shopping bag in his right hand. Miyazaki walks beside him and has her hand on Okada’s shoulder. According to the magazine, the two visited a friend’s house for a house party and the couple rode in the same car to go shopping.

The two became friends since co-starring in the movie “Kagehinata ni Saku” in 2008 and again as husband and wife in “Tenchi Meisatsu“ in 2012.

Miyazaki married actor Takakoka Sousuke in 2007 that ended in divorce in 2011 after Takaoka made some controversial remarks on twitter regarding Korea. At that time, Shukan Bushun also reported that Miyazaki and Okada went on a onsen trip.

Since the rumors from Shukan Bunshun, it is said that the two kept their distance from each other but were reunited earlier this year. According to sources, they started dating from spring of this year.

According to Okada’s agency, Johnny & Associates, “We don’t have any comment”. Miyazaki’s agency also stated “The person in charge is not here, so we cannot comment.”