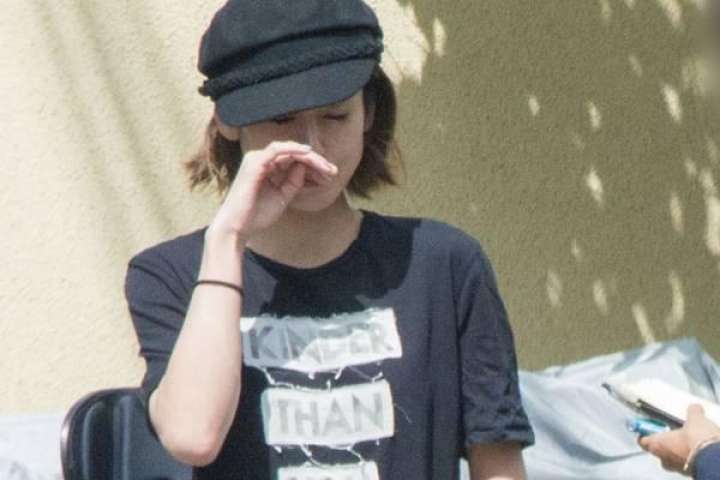 Weekly gossip magazine Jisin Japan reports in an interview that actor and model Maki Nishiyama is in a legal battle with her agency to get out of a 13-year slave contract that is forcing her into a premature retirement.

“I haven’t received any of my salary since February,” says a tearful Nishiyama in the interview.

“Something strange started to happen,” Nishiyama noted. “Last year, after giving birth to my second child, people from TV and magazine agencies contacted me directly saying, ‘I haven’t been able to get in contact with your office to book you for work.’“

“Even when I’ve made offers to work with Ms. Nishiyama, no one from her management answers the phone. It seems like the office is defunct. I heard that Kotaro Ikeda, the president of [her company] MandB, is in a lot of debt,” claims an advertising agency official.

Nishiyama hasn’t worked since May 1st. At the end of the day, the manager she had been with for 11 years told her he was resigning. In fact, there has been an apparent “distrust” towards the agency and he was close to quitting for years.

About rumors within the company:

“It’s true that the office discovered me and jump started my career, and for that, I feel as if I am indebted to them. However, I finally realized that what I’m experiencing is not normal. That past three or four times I’ve tried to quit, I’ve found out from other people that the president had been spreading rumors that I ‘wanted a lot of money’ or that my ‘parents need money.’“

About her salary being halved after becoming pregnant and the president told her to get an abortion:

“The amount of salary that I’ve received has not increased for 13 years, after debuting at 19 years old. Still, I’m able to live and feel strong in my decision,” Nishiyama admits. “When I was pregnant with my second child last year when suddenly the president halved my salary. When I e-mailed him, I asked, ‘Is it just for this month?’ and he responded ‘When you schedule an abortion, please let me know.’ From there, I knew I couldn’t put up with it any longer.“

In November of last year, Nishiyama had her lawyer send a document cancelling her contract with her agency. Shortly after, Ikeda responded and the two parties have been in contact.

When Jisin Japan called Ikeda on his cellphone, he picked up:

“Are you still interviewing Nishiyama? Anyway, it doesn’t matter what you write since it’s coming from a Weekly Newspaper…. Let her know that I plan to thoroughly fight back. One of the managers was embezzling 35 million yen which I have reported to the police. If said manager hadn’t been dealing with the mob, she might have been paid more. Time permitting, I don’t mind explaining everything properly for your next issue.”

Regardless, Nishiyama won’t back down.

“At any rate, there’s nothing I’d love more than to continue working,” Nishiyama confesses. “I want to! I really do! But I don’t know how long it will take me to return. I don’t require any expensive fees. I will overcome this, starting from scratch. As a woman from Niigata, I won’t let this discourage me.“

Earlier today, Nishiyama took to her Instagram and apologized for bringing this drama to the public, which somewhat confirms that the interview detailed above holds some weight.