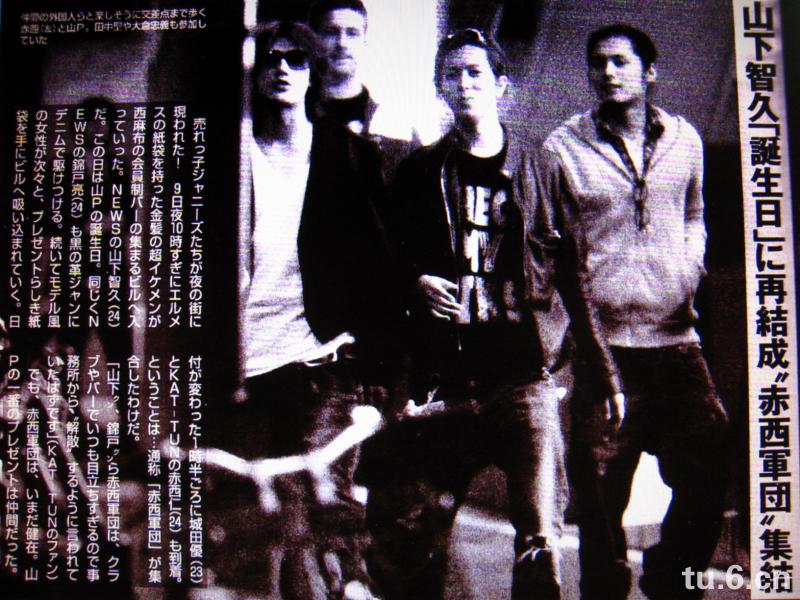 For quite a while now, Jin Akanishi (31), Tomohisa Yamashita (30) and Ryo Nishikido (30) were an inseparable group, commonly known as the “Akanishi Squad”.

Last June, the three of them got into trouble with a girl in Roppongi, Tokyo when said girl’s phone was stolen. The story blew up in newspapers and on the web.

Controversially, it is said that the squad considers this something “to be proud of”.

A restaurant staff member in Roppongi who knows the “Akanishi Squad” states, “They’re Johnny’s top idols. Usually, you would run away to save your own image, right? But rather than his reputation, he chose his mates. Yamashita is a man with dignity. But after all, he’s a Johnny’s idol. He can’t go against his agency, right?”

An entertainment writer who knows the Akanishi Squad very well states that, “Since last year’s incident, Yamashita is obviously drawing a line between himself and the squad. Well, that’s only natural, right? It seems that he received a considerably serious threat from the agency. The vital point is, ‘cut your ties with Akanishi’.”

An article that further supports this statement has been published in the August 18 release of “Shuukan Josei”. It has become a custom for the squad to travel abroad every year with the intent to strengthen the bond between the members. At the end of last year, they went to Singapore but Yamashita did not join them on their journey.

Furthermore, in June of this year, there was a birthday party of a squad member and it’s said that he did not show up there either.

“Yamashita until now would have never done that. Because his feelings for Akanishi (as a friend) were that strong.” (Entertainment writer)

It’s not known if this separation is his true intention or just camouflage but from the outside, it seems like Yamashita has withdrawn from the “Akanishi Squad”.

Nowadays, it seems like Yamashita adores his “older brother” Hideaki Ito and there are news articles of the two of them drinking while walking. What are Boss Akanishi’s thoughts on that?