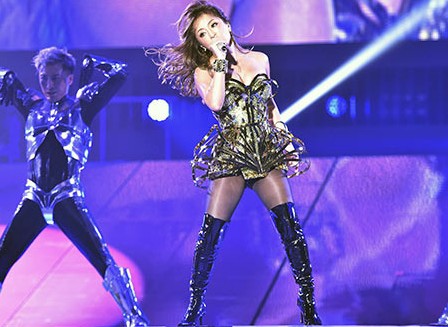 Singer Ayumi Hamasaki recently wowed nearly 11,500 fans at her latest Yoyogi Stadium First Gymnasium stop on her “ayumi hamasaki PREMIUM SHOWCASE ~Feel the love~” tour. The set list contained a bunch of her hits and new songs from her latest album ‘Colours‘ that came out earlier this week.

According to officials, “This will be the first year Hamasaki has not gone on a nation-wide tour.” Hamasaki has been known for her amazing live entertainment shows, but this time took the challenge of a “premium showcase” for this tour. She wants to put on a show that exceeds expectations making use of the newest technology and performance techniques. With 11 shows in 3 cities(Tokyo, Osaka and Nagoya), the special spaces allow mechanisms only achievable at these locations. The singer whom many think her career is on its last limb is simply just trying new things with career.

The aforementioned official went on to say, “Now she’s living between Japan and the United States. In terms of percentages, roughly 30% in Japan and 70% in the US. Her time in the US is dedicated to her private life with her husband as well as musical production. Japan is just for her her public activities now.”

Fans have gone to the internet excited about the curvier body type she has been showing off recently. The writer of a Tokyo Sports article posed a question “do you have to be chubby to be happily in love with an American man?” The author is seemingly full of questions and also asks “When it comes to limiting her work, could it mean a baby and hiatus is on its way!?”

Her team denies it, but what do you think? Is Ayu ready for a baby?