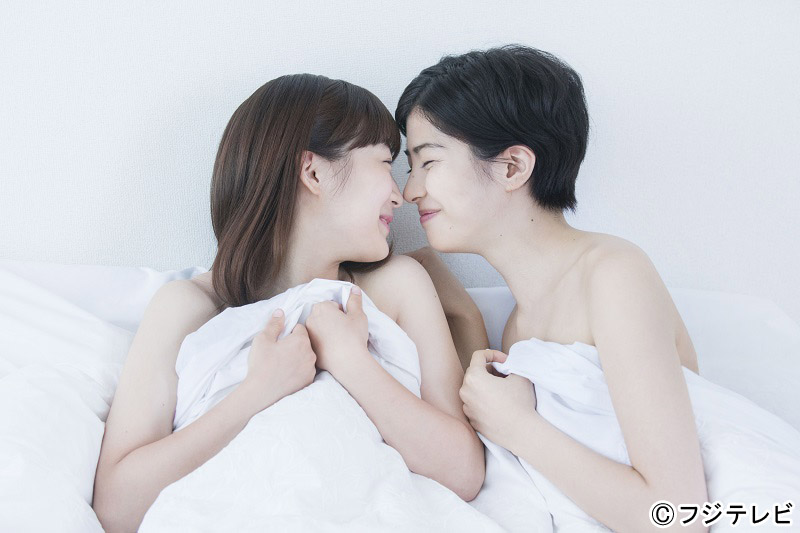 Fuji Television has announced a drama series featuring a lesbian love story as its central theme — a first for Japan.

But a prominent lesbian, gay, bisexual and transgender (LGBT) activist has slammed the show’s promotional material for portraying an “out-of-date” image of same-sex couples.

“Transit Girls,” which is set to debut on Nov. 7, tells the story of two girls, aged 18 and 21, who become stepsisters when their parents remarry. The girls, played by actresses Sairi Ito and Yui Sakuma, clash at first but then fall in love.

A promotional photo for the eight-part series features the two lead actresses lying in bed together, apparently naked, looking into each other’s eyes and smiling.

But Maki Muraki, the leader of nonprofit organization Nijiiro Diversity,which promotes workplace equality for LGBT people in Japan, believes the show is sending out the wrong message.

“Having two girls lying naked on a white sheet and using words like ‘forbidden’ is a little out of date, I think,” Muraki told The Japan Times on Thursday.

“The things we do are not about sex. We face a lot of difficulties in our life, for example in the workplace. To be told that the image of us is one of sex doesn’t make me happy.”

Fuji TV describes the show as “a heartwarming straightforward love story, but the main characters are both girls.”

It says it is the nation’s first ever drama dealing with the theme of “girls’ love.”

“It’s new for Japan, but America has had programs dealing with these issues since around 2006,” she said. “This isn’t something new.

“In America they have programs like ‘Modern Family,’ where it’s taken for granted that LGBT people bring up children. Rather than being sexual, it shows LGBT people in their everyday lives and that’s a positive force. If it’s just about sex, I can’t think of that as positive.”

Other efforts by Japan

The new show comes in a landmark year for lesbian, gay, bisexual and transgender rights in Japan.

In March, Tokyo’s Shibuya Ward became the first locale in Japan to recognize same-sex partnerships as the equivalent of marriage.

Setagaya Ward then announced in July that it plans to follow suit by issuing certificates recognizing same-sex partnerships as early as November.