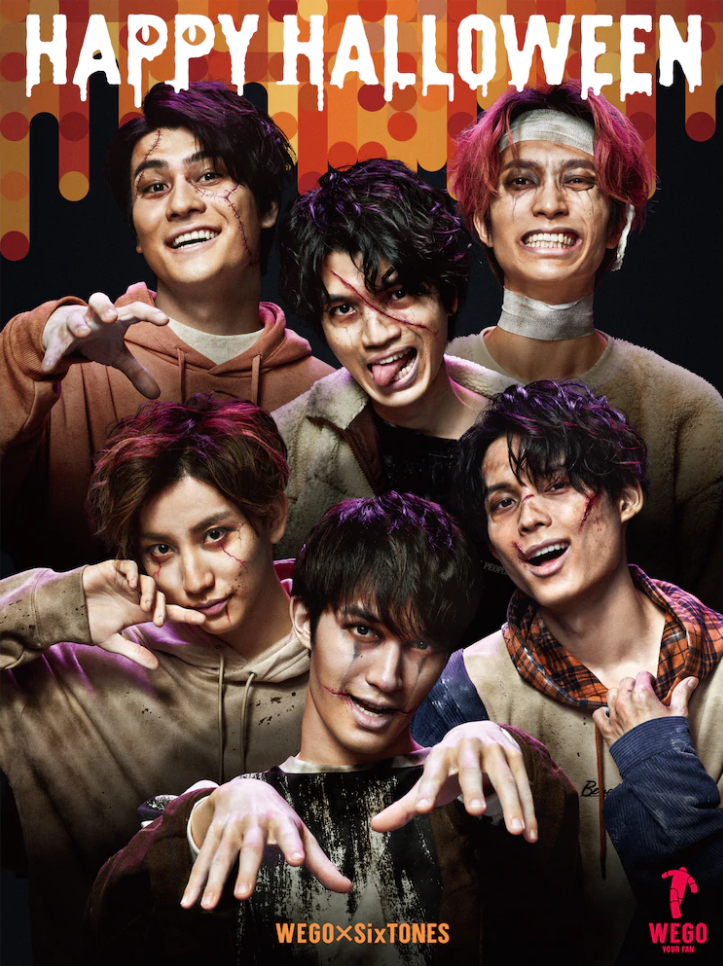 For one of the main visuals the boys appear with zombie make-up in celebration of Halloween. Beginning on October 26th, the visual will be plastered across WEGO stores nationwide in Japan. In an interview with natalie, the boys shared their thoughts on Halloween and “zombie SixTONES”.

Member Jesse commented that after seeing himself “zombified” he didn’t feel like himself, but it was a new and fun experience and thinks his fans will be satisfied with his other self! As a child he has many memories of celebrating Halloween with his family. One in particular is when he and his family dressed up wearing masks painted with “blood”, they ran around their neighborhood surprising their neighbors!

Taiga Kyomoto revealed that he never dressed up for Halloween before, so it was tons of fun to do this photoshoot. He hopes that in the future himself and the other members can dress up for their fans with a Halloween concert. Hokuto Matsumura was excited to see the final product for the photoshoot, as he thought everyone looked so different with their makeup.

Yugo Kochi applauded the makeup team that worked with them, and shared that previously for Halloween he dressed up as Sukekiyo Inugami from the classic film “The Inugami Family”

Shintaro Morimoto was quite shocked at how different everyone looked, and was excited to try something that he doesn’t regularly get to do. Morimoto’s Halloween memory was when he was on his way home from a rehearsal. Himself and the other members ran into a huge crowd of people celebrating Halloween, and they all had to huddle together so they wouldn’t get separated!

Lastly, Juri Tanaka loved the photoshoot as he said it made him feel like a child again and all the members had a ton of fun doing it. Like Taiga he hopes to have a Halloween concert one day for fans, and also celebrate the holiday again with his friends.

Some other new photos of a non-zombified SixTONES can be seen on the WEGO website modeling outfits from their new collection. Check it out here!