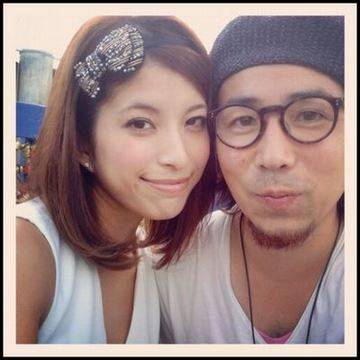 In Kokubun City Tenouji-County Osaka Prefecture on the 25th around 6:25AM, TENN, real name Takahiro Moriwaki (35), from the hip hop group “ET-KING,” was found by his wife, actress Takako Uehara (31), condominium’s parking lot within his vehicle dead after hanging himself.  A female relative who was contacted by Uehara called the police.  In the home, there was a handwritten suicide note so the Tenouji police are treating it as a suicide.

There are many news reporters around the condominium where the two live, which ultimately became the suicide scene.  TENN’s music friend who is also Uehara’s friend, after meeting with Uehara, was surrounded by the news reporters and explained “I came (to check on her) because of I was worried. Taka-chan is completely shocked and exhausted to the point where she is unable to speak…” and then requested for the media to have some restraint, “For now, please leave her alone.”

According to the Tenouji police station, Uehara noticed that TENN was missing and went to search for him.  On the 25th around 6:25AM, she then found him in the backseat of their car with a rope like object around his neck.  Uehara, through shock, lost her head and called a female relative.  After receiving contact, the relative reported to the police around 7:25AM.

Due to the home having multiple letters written by hand that are like suicide notes, the police are assuming that there is a “very low chance of crime.” It is assumed to be a suicide.

It is said that no drugs were found within the car.

From the police’s research, Uehara and TENN lived together.  They were together until the night of the 24th.

The two met in June of 2011 at a Tsunami Charity Event Live in Kobe.  As a result they started dating then married on August 23, 2012.  It was a “good day” anniversary for them.  They were living their newly married life in Osaka, ET-KING’s active location.

TENN was interacting with his fans where he appeared at an online event from 9:00 to 10:00PM on the 24th.  On the same day he also updated his blog titled “To make.”  He stated “The work of making a song from nothing.  Though it is quite difficult, once complete, it brings joy.  So, I will make one. By 1010” expressing the joy and difficulty of creating.  It was a positive post, and does not seem like the day before a suicide.

Also, ET-KING is in a “recharging period” where they are not active.  This year’s April, on an Osaka radio he stated with a smile that he was “happily married.”

On the other hand, on the 24th Uehara posted on her blog that she made boiled dumplings and wrote, “Cooking is fun but difficult.”  On their 2 year anniversary on August 23rd, she posted a shot of them with “That you for always supporting me” to state her thanks showing that they had a good marriage.