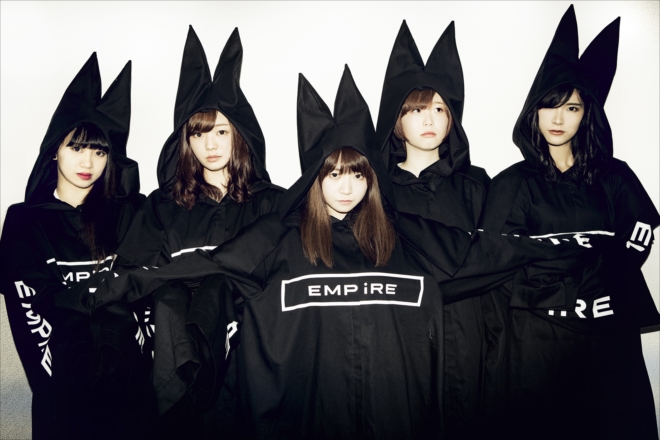 WACK, idol management agency behind BiS and BiSH, has set the big wheel on motion when it comes to their newest group, EMPiRE. The five-member group began as a hooded mystery group that was supposed to reveal their faces only after each member had reached 10 000 followers on Twitter. However, it turned out that some of the followers were bought bots, and the bar was raised to 15 000. Apparently WACK and/or the participating record label Avex realized it was a crappy idea, since eventually the profile pictures for all the members were revealed, even though only one member had reached the goal.

After a few months of quiet and peace, WACK is finally properly launching the group. On October 6th they released a statement declaring that EMPiRE’s first song would be available for downloading and streaming – for free. However, the track, titled ‘EMPiRE IS COMING’, is not quite what one would expect. Instead of the girls themselves performing the song, the lyrics are sung by Junnosuke Watanabe, the producer of the group. He is also credited as the lyricist, collaborating with Kenta Matsukuma. The gimmick is probably annoying the living daylight out of all the fans expecting to see if the vocals match the spooky visuals of the group, but at least the marketing trick did what it was supposed to do – and that is to get the idol community talk about the new group.

The song can be downloaded via EMPiRE’s official homepage or streamed on SoundCloud.