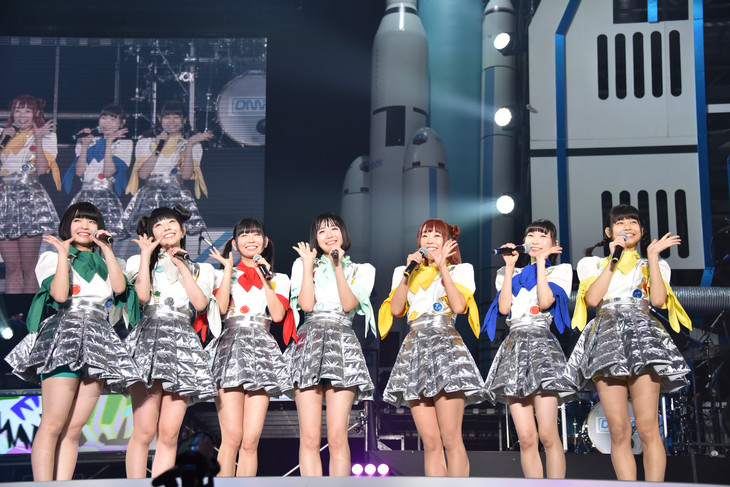 Earlier this year, Moga Mogami left idol group Dempagumi.inc rather abruptly due to health reasons. Approximately half a year later, on December 30th, the group announced that they had added two new members, increasing the number of girls from five to seven. The announcement was made during the group’s live in Osaka-jo Hall. Joining Risa Aizawa, Mirin Furukawa, Nemu Yumemi, Eimi Naruse and Ayane Fujisaki are Rin Kaname (nickname Perorin) and Nagi Nemoto (Nemo).  Kaname’s main color is pale yellow and Nemoto’s color is green.

Nemoto and Kaname are both from another idol group, Niji no Conquistador. More specifically, Nemoto is from the main unit and Kaname is from its sister unit titled Beboga (Niji no Conquistador Yellow Team). Beboga was known as Baseball Girls until 2016, when the group changed its management and was transferred to Pixiv Production Inc. The two girls will continue their activities in their original groups as well, meaning their positions at Dempagumi.inc are concurrent.

At the same Osaka concert, Dempagumi.inc announced a new single and a nation-wide tour. The new single is still untitled. However, the girls performed a new song from it, named ‘Girametasu Denpa Stars’. The song’s purpose is to convey Dempagumi.inc’s feelings concerning the new member structure. The song is penned by Hyadain and composed by Takashi Asano. Asano has composed songs for both Dempagumi.inc and Niji no Conquistador before, as well as for many other idol groups, including The Idol Formerly Known As LADYBABY and AKB48. Hyadain, real name Kenichi Maeyamada, is famous for writing and/or composing anime theme songs, such as TVXQ’s ‘Share The World’ (‘One Piece’) and Momoiro Clover’s ‘Mirai Bowl’ (‘Dragon Crisis!’).

The single will go on sale in April, 2018. The group will embark on the tour at the time of the single release.