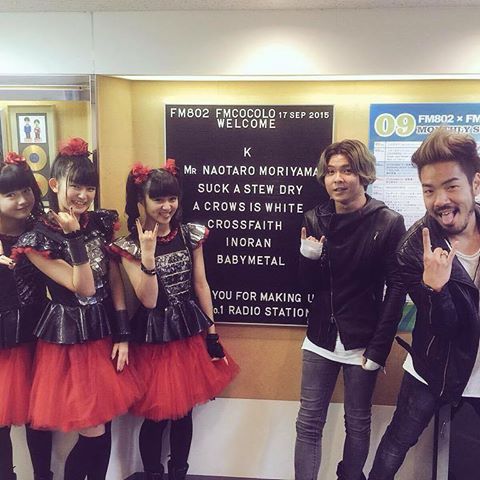 Recently, Metal Wani released an interview on their YouTube channel with CROSSFAITH. The English-language interview was conducted in London, while the band was on tour there. In the interview, they discussed various topics, including their music, their touring, and their growing fanbase, but one segment of the interview has garnered the most attention: their thoughts on BABYMETAL.

When asked about the metal scene in Japan, the interviewer lumped CROSSFAITH and BABYMETAL together, to the confusion of CROSSFAITH. “BABYMETAL is not a metal band”, replied bassist Hiroki Ikegawa. The interviewer expressed confusion at his statement, with frontman Kenta Koie somewhat agreeing with her point. Kenta went on to clarify that BABYMETAL “has a metal influence.”

BABYMETAL is considered by some to be an actual metal band, despite not being involved with or playing the music they sing over. Some of the people who don’t see BABYMETAL as a real metal band consider them to merely be an idol group, akin to AKB48 or Nogizaka46, but with metal instead of the usual pop sound.

So what does it mean when their supposed peers in the loud rock scene don’t see them as part of that scene? Check out the video below and tell us your thoughts!