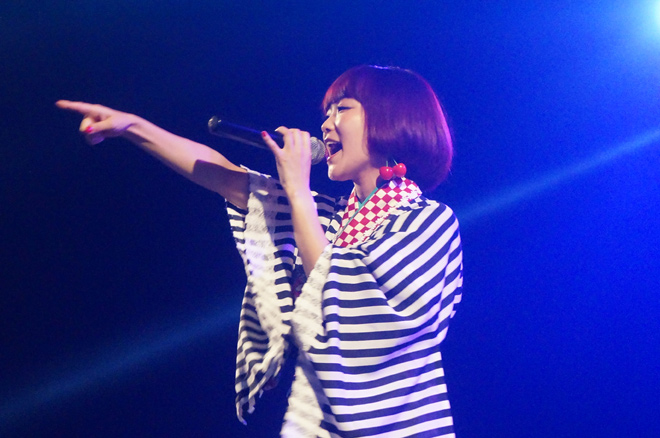 Barks reports that fairy-like electro-pop singer Yun*chi, known for doing the ending theme to the first season of popular anime Log Horizon, successfully pulled off her first performance in Indonesia last weekend. The diminutive soloist appeared at the University of Indonesia’s event J-Music LAB in Gelar Jepang in Jakarta, where she purportedly sang in front of an audience of 15,000 people, her largest yet. Her setlist and artist comment, as well as fancams of her performance and details about her meeting with an Indonesian celebrity, can be found below!

Appearing on the 24th, Yun*chi served as the headliner of the event, cheerfully kicking off her set with her live staple “Tenshi no Yubikiri”, an older collaboration between her and well-known Vocaloid producer kz(livetune). The high spirits of the crowd were carried further by her debut song “Reverb*” followed by “Shake you*”, and afterwards she greeted the audience in Indonesian. The live continued with the recently released “Starlight*”, “Perfect days*” from her first full-length album Asterisk*, then “Fuzzy*” and “Your song*” (ending theme to season one of Log Horizon) from her first single. The venue of 15,000 raised their hands and sang merrily as the energy in the outdoor event heightened.

As the closer to her live, Yun*chi performed her track “Waon*” which was originally a collaboration with IroKokoro Project, an Internet-based group of international singers with a passion for Japanese music and culture. However, instead of the original Japanese, this updated version of “Waon*” featured a chorus redone in Indonesian. A joyous audience sang along with Yun*chi, ending the concert on a high note. 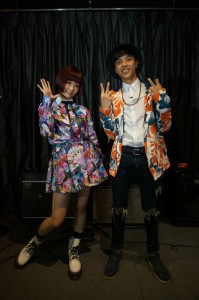 The day before Yun*chi’s performance, she met with Bisma (pictured), a member of popular Indonesian male idol group SM*SH. The two conducted a talk and sang “Waon*” together in a rare cultural exchange between Japan and Indonesia. Yun*chi had the following to say about her experience in Indonesia:

As far as the concert goes, there were so many people who came to see me that I couldn’t see them all from the stage. Through music, I felt like we crossed the language barrier, and I was very moved! Everyone with their glow sticks and voices had smiling faces and appeared to be sparkling prettily. Recently, I was able to learn many things about Indonesia, and I also learned that there’s a lot of love for Japan! It would be nice to come back again… Bisma whom I met in Jakarta! Everyone at the University of Indonesia! Terima kasih! Love!!!

Additionally, there are a few fancams that were taken of her performance.

Yun*chi is set to release her second CD single “Wonderful Wonder World*” on October 22nd this year. The title track will be used as the ending theme to season two of Log Horizon. Please look forward to it!