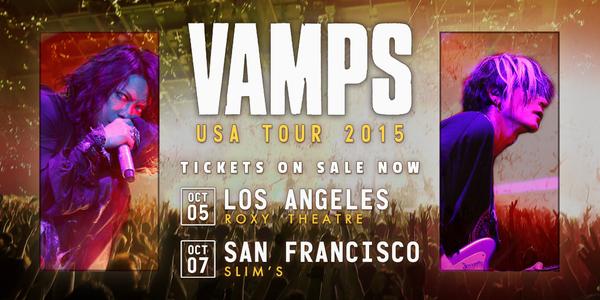 Hot off the heels of their Latin American Tour performances in four countries next week, rock band VAMPS is set to perform two dates in Los Angeles and San Francisco this October.

Fronted by Japanese rock veterans HYDE (lead vocalist of L’Arc~en~Ciel) and K.A.Z (guitarist of Oblivion Dust), VAMPS is one of the most successful international Japanese rock acts of all time. Having performed over 350 shows worldwide since their formation in 2008, VAMPS continue their year of touring in conjunction with the release of their third studio album, Bloodsuckers, late last year.

VAMPS’ upcoming shows are their first return to the United States after performing as the supporting act for twelve stops on the SIXX:A.M. The Modern Vintage Tour this past Spring. The rock duo will perform Monday October 5 at Roxy Theatre in Los Angeles, then on Wednesday October 7 they are set to play at Slim’s in San Francisco.

Tickets are on sale now.