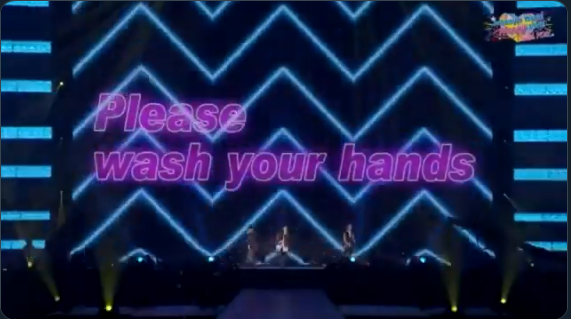 It was recently announced that Johnny & Associates would be streaming two concerts, apart of the “Johnny’s World Happy LIVE with YOU” live series. Due to COVID-19, the company has been forced to cancel numerous live events so they decided to hold this as a way of cheering up fans.

One of the highlights of the concerts came from KAT-TUN, who remixed their song “We Are KAT-TUN” in a way to help the public!

The song was originally included on their 2019 studio album “IGNITE”, and quickly became a fan favorite live. In the lyrics they urge to the fans to crap their hands, as-per the album booklet and multiple online lyric sites, when they likely meant clap!

In the updated version for the concert, they changed crap to wash. Check out an excerpt below, courtesy of Twitter user csxmichild

A variety of Johnny’s talent also released a cute original song about washing your hands.

The series of concerts have proved to be a success, in just one day the first March 29th concert received over 4 million views, while the recent March 30th live has so far achieved 2.3 million views in 15 hours. Check them out on Johnny’s official YouTube.