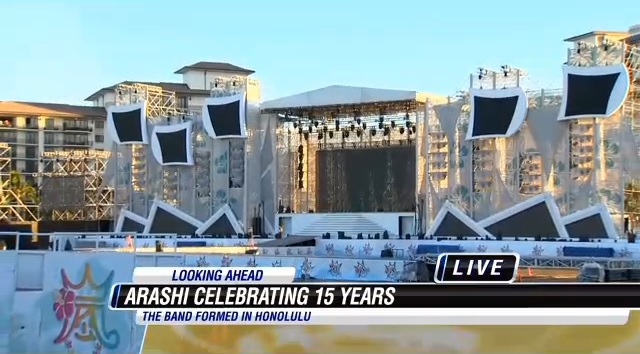 – that’s one of the headlines running in local Hawaii news for days now. It’s not everyday or a lot of times we see Jpop acts on concerts outside Japan- a huge scale at that, and being covered locally widely. This is the first time Arashi (storm in English) is playing in the US.

It took the Hawaii Tourism Authority 2 years and a 15th year celebration to lure Arashi in. According to concert promoter Tom Moffatt “Of all the concerts I’ve done, I think this is the biggest. To build a stage like this from scratch, the number of high definition screens, nobody has ever done that before.” He added “You know, I’ve done great acts like the Rolling Stones and Elvis…but the excitement level on this one is, because the media involvement, is unprecedented, really.”

The stage is almost ready. Part of the draw of the concert for locals who haven’t even heard of the group Arashi before or who would not even understand them, is to see what the show is about, seeing the huge stage being constructed. By any definition, this is a $8 million worth of production- which was paid for by the band. They’re bringing the largest stage in Hawaiian history at 63 feet high and 280 feet wide, moving platforms and 13 HD screens, which took dozens of sea and air cargo containers to bring, to Hawaii.

How are they being received? Watch local Hawaii news coverage on the upcoming concerts.

Since the concerts are expected to pour $20 million into the local economy, it is being covered by local media. 15,000 people are coming from Japan and another 15,000 local fans who have bought tickets. 4,000 additional tickets were added for each night.

Arashi arrived earlier this week in Hawaii and were spotted during rehearsals. Arashi flags, banners and tour buses are filling up the streets. The group will be holding their 15th year anniversary concerts on September 19 and 20 starting 5:30 pm (Hawaii Time)

Although the local reports tackle more on the gains for Hawaii and how it can be a game-changer for large scale acts, there are hopes that we can see more Japanese acts perform outside. 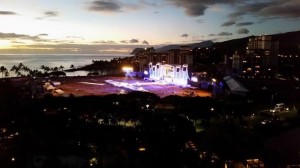