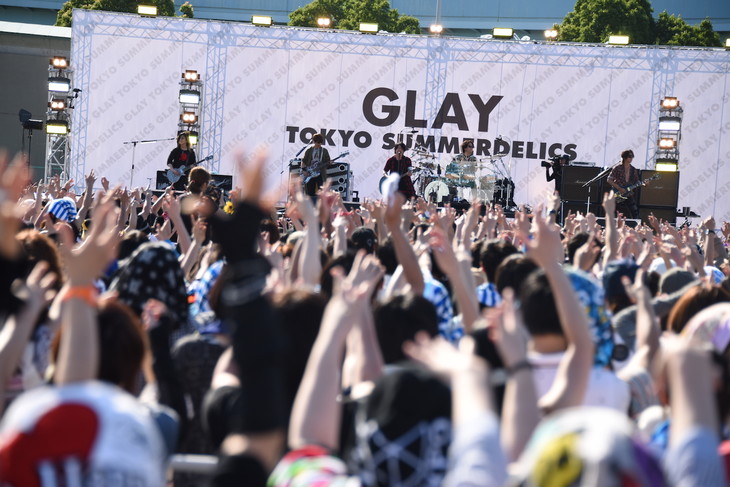 Legendary rock band GLAY recently held a free outdoor live concert in support of their 14th studio album “SUMMERDELICS“. Over 10,000 fans showed up to the event.

On the official website for SUMMERDELICS a mysterious countdown appeared, promising that something very special would be happening on July 31st. The countdown finished in the morning of July 31st, where it was revealed that GLAY would be holding a free outdoor concert! Hoards of fans instantly rushed to the venue to ensure that they secured a good spot at the venue. By 3:30 the members of GLAY appeared on stage opening with the other end of the globe, a brand new song from SUMMERDELICS.

While passionately singing lead vocalist TERU made sure to ask fans how they were faring in the humid weather between songs “It’s hot, don’t forget to hydrate yourself!” . Shortly before performing the final song on the setlist XYZ, TERU thanked all the fans for showing up and hopes they enjoy summer by listening to SUMMERDELICS.

He also told fans to look forward to GLAY’s upcoming area tour that begins in September, promising that it’ll be a show they will never forget. September also marks the re-release of GLAY’s iconic 1996 studio album BELOVED. Titled BELOVED Anthology, it will contain remixed and remastered tracks, 15 demos, and a documentary chronicling the albums production.

Watch the full concert below the jump!