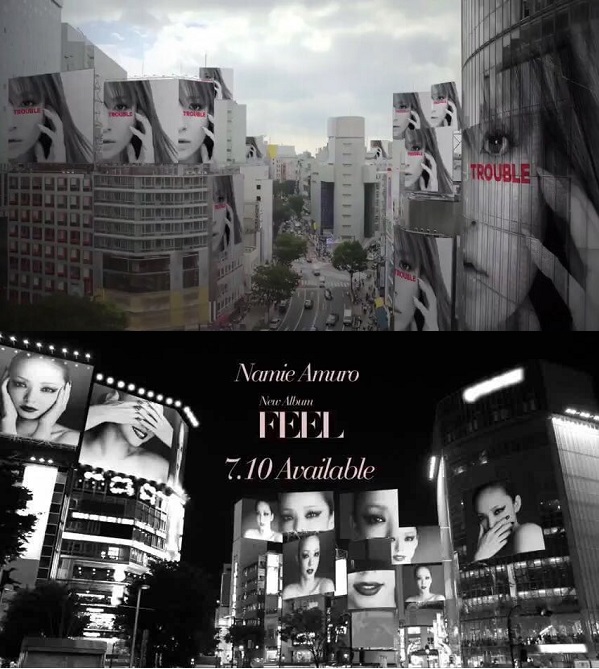 Earlier in the day diva Ayumi Hamasaki uploaded a CM for her upcoming “album” “TROUBLE“.

The CM consists of camera shots all around Tokyo, featuring various billboards around with the city with “TROUBLE”‘s album artwork. The CM finishes with her artwork plastered all over the buildings and billboards on a street.

Japanese and international fans both quickly pointed out that the exact same concept was used for promotion of Namie Amuro’s 2013 album “FEEL“.

I love you @ayu_19980408 but I can’t be agree with this. You can not take an idea from another artist, because yours is in risk to be better or worst. 😕 and FEEL album is just PERFECTION

While it might have just been an oversight from the person who created the CM for “TROUBLE”, both Hamasaki and Amuro have strong ties with avex trax so you’d think someone would notice the similarities between the two before giving it the green light.

Some fans stated that since it’s only a promotional CM it isn’t really a big deal, while others acknowledged the similarities saying they liked both CMs anyway.

See for yourself below!

“TROUBLE” will be released on August 15th, 2018. While avex is promoting the album has a brand new studio album, it’s more like an EP/mini-album considering it only has five songs.

In support of the album, Hamasaki will be embarking on a brand new tour titled “ayumi hamasaki LIVE TOUR 2018-2019 TROUBLE” beginning on October 19th.