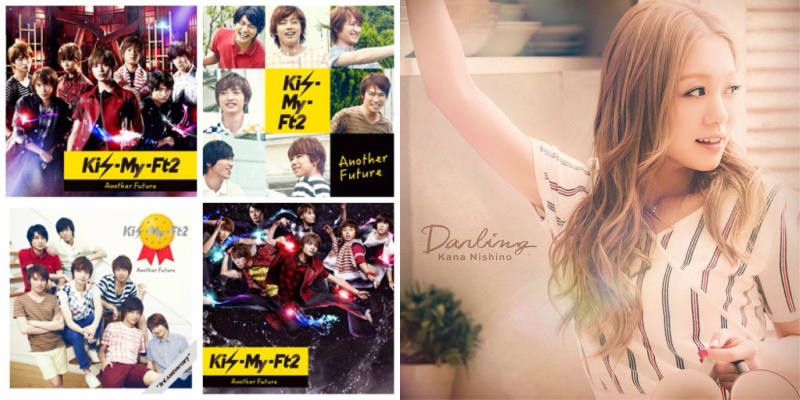 Hello AramaJapan readers! We are back with this week’s installment of #1 Song Review! Last week was a battle between Kanjani8 and Hata Motohiro, with Motohiro beating Kanjani8 2 to 1. This week we have 2 new songs. Check out what the staff thought of these songs and give us your thoughts on them as well!

Ronald: This is god awfully generic. There’s nothing about this song that stands out. It’s just kinda there… I mean I know that people are into them for things other than music so that whole appeal is lost on me. From a purely musical standpoint, it’s just not interesting. There’s nothing here that catches my attention. 3/10

Cait: Identifying Japanese pop music arrangers by ear has long been one of my useless skills, and sure enough, I did a kind of confused dog head-tilt as soon as the bombastic piano/strings/synth intro kicked in: “Wait, that wasn’t what I was expecting. This sounds really familiar. Is this…?” ‘Another Future’ features solid production from prolific electronic duo Jazzin’park that I picked up on within seconds — no surprise, since their work on Yun*chi’s ‘Starlight*’ dominated my summer. On the whole, I don’t suppose this is a particularly ambitious or novel track, but it has the kind of driving, straight-hitting sound I prefer when I listen to fluffier fare like male idols. What I find lacking here is actually the vocals. To a fan, I’m sure they’re perfectly distinguishable, but listening to this unit for the first time, I was immediately hit with that sense of “homogeneous Johnny’s voice syndrome” that makes a group of seven people all sound like clones of one. Still, I think their audience should be happy with this one for sure, and I wouldn’t mind hearing more of them either. 7/10

Krys: This is the first song I’ve ever heard by Kis-my-Ft2. It isn’t the worst A-side I’ve seen get a #1 ranking, but it doesn’t particularly stand out to me — the melody is so forgettable that I couldn’t remember how it goes even after hearing it a few times, which I guess is a valid critique when you’re looking at the mainstream music market. The production is the only redeeming factor for this, but even then, I wouldn’t keep this song in my music library or anything. 5/10

mintyaiko: I haven’t listened to Kis-My-Ft2 in what feels like forever. I believe one has to be in a certain mind frame to listen to music from Johnnys. Else you just won’t be able to enjoy it. I can’t say that this is my favorite song from this group. The song feels like a standard Johnnys release though I do like the chorus. Maybe because it reminds me of another song. I’m not wowed but I can definitely see myself listening to it again. 7/10

Ronald: Good God, is this song dull… This is like the crap Taylor Swift was pumping out a few years ago. I like Kana in theory. She has some really good songs, but then she releases pap like this that makes me question why I even like her. She can do so much better than this. Maybe it’s the producer’s fault? I wouldn’t be surprised if she released a new album by the end of the year and to be completely honest, I’m not anticipating it. The singles this era have all been pretty lame. This country pop bore can get added to that heap. I don’t like country music so that isn’t helping things. I downloaded this single and this song has absolutely 0 playback value. 4/10

Cait: This one got off on the wrong foot with me from the get-go by sounding overdone, played-out and reminiscent of the kind of trite commercial jingle music I greatly dislike. Nishino’s songwriting remains as Swiftian as ever, a saccharine love letter to a boyfriend who meets none of her expectations but whom she couldn’t imagine herself without all the same. I couldn’t tell if the PV endeared me more to the concept with its anthropomorphic product-placement Xperia phone and lipstick romance or just creeped me out. But setting all of that aside, I have to appreciate her talent for putting girls’ feelings into words in a way that sounds effortless, and the longer it went on, the more I found myself warming up to it. It may not be her most attention-grabbing single, but the bare-bones instrumentation lets her lyrics do the talking and makes for relaxing summer listening. 6/10

Krys: Similarly with Kis-my-Ft2, I haven’t listened to a lot of Nishino Kana in my time, though I’ve seen plenty of criticisms of her work. I was pleasantly surprised by “Darling”, it’s a nice little summertime track and the PV is well-shot (with the exception of the bizarre budget animated cell phone and lipstick, but I’m sure the idea sounded good on paper). I feel that the hook is catchier than Kis-my-Ft2′s song. Again, I don’t think it’s something I would keep around and listen to, but I enjoyed it more than “Another Future”. 6/10

mintyaiko: I have to agree about Nishino Kana being like Taylor Swift. Personally, I’ve only really liked one song of hers. However this song won’t be joining the list. I find it to be boring and forgettable. I had to listen to it twice since the first time around it did put me to sleep. While it’s not a terrible song, and Kana’s vocals are okay, the melody is so-so. 5/10