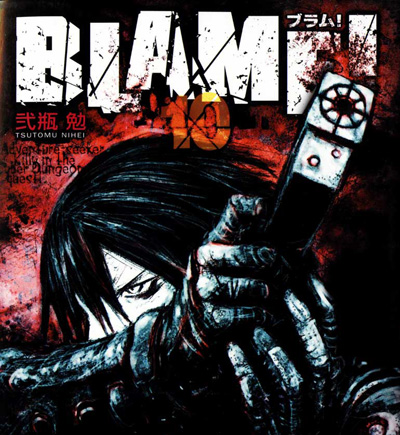 The wraparound jacket of the 15th and final volume of Tsutomu Nihei’s Sidonia no Kishi manga has announced that another of Nihei’s works, Blame!, will receive an anime movie adaptation.

Previous adaptations include a net animation series in 2006, a prologue OVA in 2007, and an inserted scene in the eighth episode of Sidonia no Kishi: Daikyuu Wakusei Seneki earlier this year.  There have been no announcements regarding staff or studio.

Here is a short synopsis.   The manga features little dialogue with well done art in a cyberpunk dystopian setting.

Synopsis
Killyis a man of few words. He wanders, seemingly endlessly, through a lonely, gargantuan labyrinth of concrete and steel, fighting off cyborgs and other futuristic nightmares, searching only for something called Net Terminal Genes. And he has a very powerful gun, which he uses without hesitation whenever anything resembling danger rears its ugly head.Who is this quiet, violent, determined man and what are these Genes he seeks? The small communities he finds tucked into the crevices of this towering, dystopic ruin hardly give him leads on his treasure, driving him to find larger enclaves of civilization where people can reveal more about the world he lives in and the quarry he seeks.