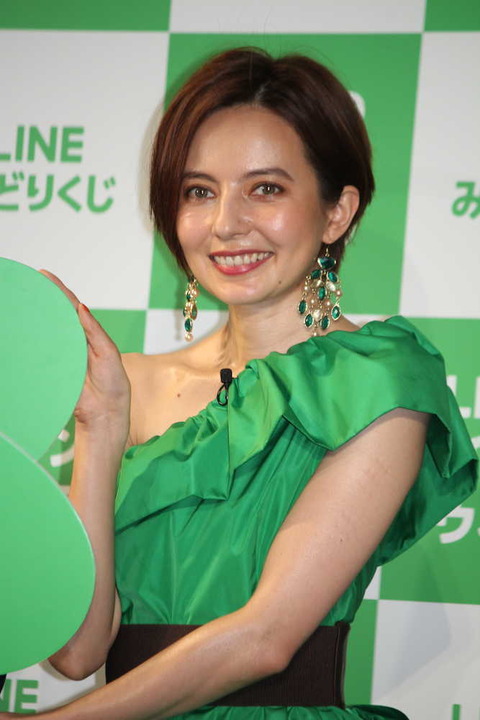 On April 27th, tarento Becky (33) attend a LINE Golden Week Campaign event in Tokyo. Becky was pleased to be able to partake in this new years gift and was happy to be connected to everyone.  Just last year, Becky was involved in a scandal with Kawatani Enon (28) of Gesu Kiwami Otome which saw her uninstalling the LINE app after her messages with the married singer leaked to the public. However, Becky revealed that she reinstalled LINE at the end of last year. When speaking about the app, Becky said, “ I continue to use the app. I have about 10 embarrassing conversations.” She also said that family, classmates, and other entertainers she knows don’t really use the app, but there is no deep meaning there. Becky also said she would like to increase the number of people she speaks to on LINE which was welcomed by laughs.

When asked who she would like to become LINE friends with, Becky named tarento and comedian Cunning Takeyama (46). Becky also confessed that around the time she was making trouble last year, she was worried when a senior at her office called upon her. However they asked her to teach them how to use line, but she declined.

Of course Japanese netizens had to poke fun at the irony and offer their opinions on the matter. One comment suggested that the first of her 10 embarrassing conversations was with Enon. While another suggested she was self centered. Others went on to attack her character and appearance.

“She’s suddenly gotten old. Even her cuteness has disappeared. She looks like an old foreigner.

“It’s because she has the hairstyle of a grandma”

“Still searching for a man in a band it seems.”

“Because there’s no demand for you anymore, maybe you should marry an old man around your age.”