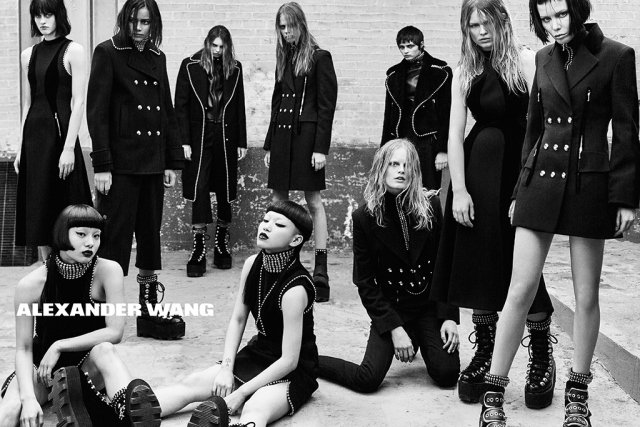 Dance duo / couple AyaBambi (composed of Aya Sato and Bambi) have been getting quite a bit of attention recently. Whether it be for their viral dance videos, or their work with musical acts, people are on the look out for them. After working with the likes of Kato Miliyah, BoA, and Shiina Ringo, the ladies made the trip to the West to dance for Madonna. She accused them of “choking her off stage” during the 2015 Brit Awards this past spring, resulting in a nasty fall during her live performance. All is well though, seeing as how AyaBambi could be found in her video for “Bitch, I’m Madonna”, which was released last month.

The “Bitch, I’m Madonna” video featured a number of cameos, including one from New York-based fashion designer Alexander Wang. He recently revealed the ad campaign for his goth-inspired fall / winter 2015 collection, and it features AyaBambi.  Of the duo he said, “I’ve been watching Aya and Bambi for a while since I stumbled upon them online. Coincidentally, they had just been cast for Madonna and I met them at M’s party in Paris and fell in love. They all are such individuals yet they all fit the characters of this collection seamlessly.” The ad campaign will can be seen in fashion magazines worldwide in the coming months.

Their shot from the campaign can be seen above. After the jump, there’s a behind the scenes video and a special dance video from the the campaign’s Steven Klein-lensed photoshoot!