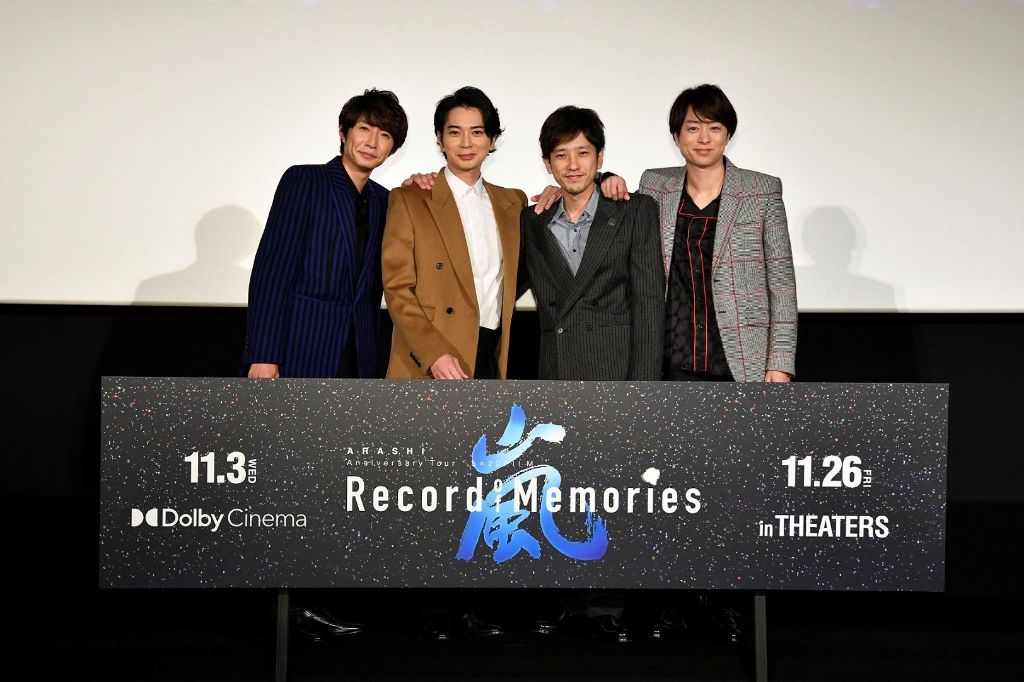 Arashi‘s live film “ARASHI Anniversary Tour 5×20 FILM ‘Record of Memories'” was released at Dolby Cinemas today, ahead of its Japan-wide release on November 26. The group, with the exception of Satoshi Ohno, made a suprise appearance at Tokyo’s Marunouchi Piccadilly today to celebrate the film’s release, to great applause.

Sho Sakurai said to Masaki Aiba that he was worried about the response they would get from the audience, but he was happy with their enthusicatic response. Sho noted that today is their 22nd anniversary, and that they were on stage for it, before thanking the audience for attending.

“Long time no see,” Jun Matsumoto said. “I haven’t been in public recently, and I feel nervous about standing here with three people. Even though it’s for a short time, thank you for coming,” he said to the audience.

Sho revealed to the audience that a week ago all five members of Arashi gathered for the first time in ten months.

Towards the end of the event, Jun revealed that he had a message from Satoshi, which Sho then read.

In the message, Satoshi revealed that since Arashi’s hiatus, there have been days where he just lays on the couch doing nothing. He’s also been making butter chicken curry as of late. There are some nights when he goes to bed early, around 10 PM, and wakes up at 4 AM. In the end, he is alive and well.

When thinking about the time “ARASHI Anniversary Tour 5×20 FILM ‘Record of Memories'” was filmed, Satoshi said that the five members of Arashi were just thinking of their fans. Director Tsutsumi, who is an integral part of Arashi’s history, along with the staff and the fans put their heart and soul into the film, and he would be happy if people watched it.

With a laugh, he said if he were to do one of Arashi’s concerts from the film today, he would be exhausted in the first 30 minutes, leading him to disappear from the stage to go home and sleep on the couch.

Satoshi noted that the film opens nationwide on his 41st birthday, and he hopes that viewers will enjoy watching his 39 year old self, along with the rest of Arashi, give their all.

At the event’s close, Jun and Kazunari Ninomiya both expressed happiness and gratitude for the film being released on Arashi’s anniversary.