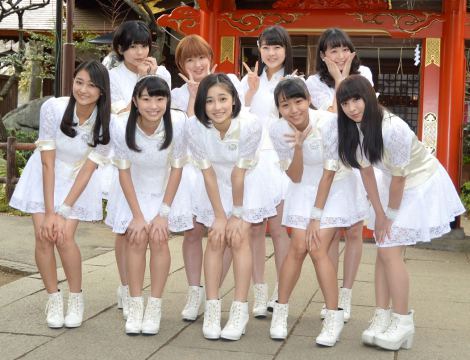 ANGERME went to Atago Shrine in Tokyo to pray for the success of their latest hit “Taiki Bansei / Otome no Gyakushuu”, which was released on February 4th.

Formerly known as S/mileage up until last December, the group just added members for the third generation last October. The release of their new single marks the starting point of new changes for the group. Besides their wishes to become successful, Ayaka Wada, the group’s leader, wished to have more concert tours, to perform at Budoukan again, and to become number one in Hello! Project.

“We never had an opportunity like this, so a lot has changed since we became a group of nine members. Up until now, we felt like we hit rock bottom at one point, and there were many experiences when our teachers got mad at us when we had six members,” Meimi Tamura commented. Akari Takeuchi added with a bitter laugh, “During our ‘rock bottom’ period, only three reporters would come to our press conferences and events.”

Wada continued, “Compared to us, Morning Musume is number one in Hello! Project, but we would like to steal their spot. ℃-ute is our senior as well, but we want to surpass them as well.” As of now, Wada is actually a senior to all of the current members of Morning Musume ’15, so she holds a fiery passion towards her “idol rivals”.

Kanon Fukuda also talked about her future ambitions for the group as well: “In the future, when people think or mention about idols, I want them to immediately think of ANGERME.”

Before praying for the success of their new single, the girls walked up the “Stairs of Success” (a famous part of the shrine) hand-in-hand. Although the members were wearing light clothes and wearing heels while walking up the steep steps, they successfully made it to the top.

Rikako Sasaki, one of the newest members, showed off her strong spirits and commented, “I never walked up such steep stairs like this. Also, this is my first time praying for a single’s success, so I want the sales to do well because we were able to have this experience.”