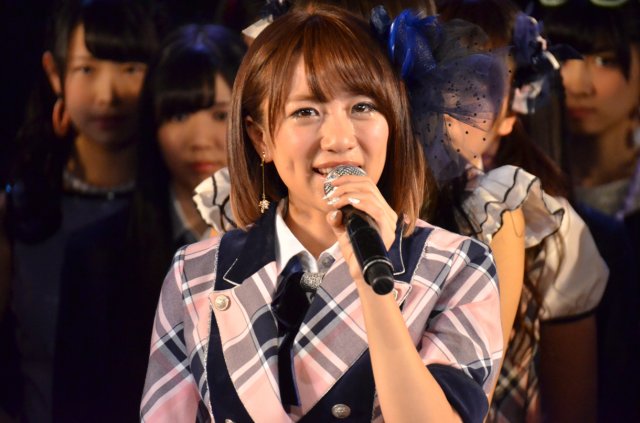 Today at the AKB Theater in Akihabara, captain of AKB48’s Team A and the General Manager of AKB48 Group Takahashi Minami has announced her graduation for one year from now.

Additionally, with Takahashi as the current General Director for AKB48, she has appointed Yui Yokoyama, captain of AKB48’s Team K, to take her place once she has graduated.

Takamina-focused translation tumblr TKMN World has translated her speech from the video above.

Today is AKB48 Theater’s 9th Birthday. This year, 2014, is a year filled with various happenings for AKB. Among them are farewells with fellow comrades, which as a group, is a crisis as well.

Overcoming all of that and being able to welcome this wonderful 10 year on the theater stage like this, it is all thanks to everyone.

Looking back at December 8th 2005, it was the day we first stood on this stage.

Honestly, when we first started, we were called 「アキバ四十八」(AKIBA YONJYU HACHI) continuously during outside jobs. Our degree of familiarity among the masses did not increase and we had some really hard times.

But, even through those times, this theater continues to exist.

No matter how painful or how difficult it was, even at times when we could not bear to stand up, just by returning to this theater, everyone is here to greet us with warm smiles & cheers.

This place, to us, is our home.

And in our home, this theater, there are two pillars.

Honestly, they are a great hindrance (laughs).

But there is an established practice here.

Once per year, on this December 8th, the theater’s birthday, a pink tape is pasted on them.

‘Someday, it would be nice if they can be filled with pink tapes until we can no longer see the pillar’, these are the hopes entrusted while we continued this practice since the first year of our formation.

In the beginning, it may not have such a meaning like that.

But, with all the wonderful people here, and being able to paste the tape with so many comrades here today, I’m happy.

And next year, on these pillars, the 10th tape will be pasted. AKB48, 10th Anniversary.

Looking back at it, it really feels like a blink of an eye. But at the same time, it feels like it has taken us a long journey to reach where we are now.

10th Anniversary, I think it is an important turning point.

Allow me to make an announcement here.

It is something that would only happen in a year’s time. But, I am AKB48 Group’s General Manager. In order to allow some hand over time for members, I have announced it at this timing.

For me, I am really glad I joined AKB48.

There have been many farewells with fellow comrades.

And there are only three people left in the same gen.

When I realized it, the scenery around me has changed as well.

Even singing the same songs, around me are position of members who have long gone.
“Why am I here?” it would be a lie if I said that this thought have not crossed my mind.

Even so, ‘it is great to be here’. I am able to feel this way thanks to Akimoto-sensei, all the staff members, wonderful members here and above all, the fans. Being able to meet everyone is the most valuable treasure in my life.

There might be not much time left for me to repay this AKB48. Even so, in some way, I would like to leave something behind for members who will shoulder AKB48’s future. I think that is one of the shape of the repayment that I am able to afford.

After I am gone, I would like to name Yui Yokoyama as the person who would lead AKB48 Group as next General Manager.

Frankly, General Manager is a bothersome position. It is hard.

I think members close to me might have felt it too.

That is why I really hate that I have to pass the name of General Manager to my good friend, Yokoyama Yui.

I had wanted (this post) to end with me.

But, with a big group of girls like this, being distracted with lively conversations, not able to concentrate, unable to stay collected, there are many times like that.

At those times, I think there is still a need for someone in the group to speak out words like, “Let’s go, let’s do this”.

To me, she is a wonderful junior.

She is really someone who is earnest but awkward at times, she works really hard with utmost effort.

Her dream is the same as mine too, solo debut.

By handing her this General Manager post, it may keep this dream of hers at a further distance than it is now so I felt really troubled over it, but I think she needs an impetus.

But at the same time, there will be an increase in the amount of exposure to society’s eyes and simultaneously chances will increase.

With this, I want Yokoyama to think of it as a chance and do her best.

I want her to do her best. For that purpose, the next 1 year, I will be transferring my baton to her.

There are still many things I wish to leave to her, to all the juniors.

Honestly, there are so many that I am not sure I can teach all of it in this 1 year.

Even so, with the remaining time, I will do my best to proceed together with everyone.

I have not properly decided the exact outlook or details of my graduation yet. I hope I can notify everyone in some way or another when I can.

The only thing I can say is,
This is not a sad thing.

Next year, it will be AKB’s 10th Anniversary. An important year.

I am very happy that I can stay in this group for 10 years and I don’t think this is a group that will end in 10 years.

I want (everything) to be passed on to the 11th year. I think it would be alright.

And so, in my own way, I will do my best to pass on the baton to Yui Yokoyama and the remaining members. Even from now onwards, please continue your support for AKB48 Group.

A countdown to the group’s 10th anniversary has been placed in the theater’s lobby.